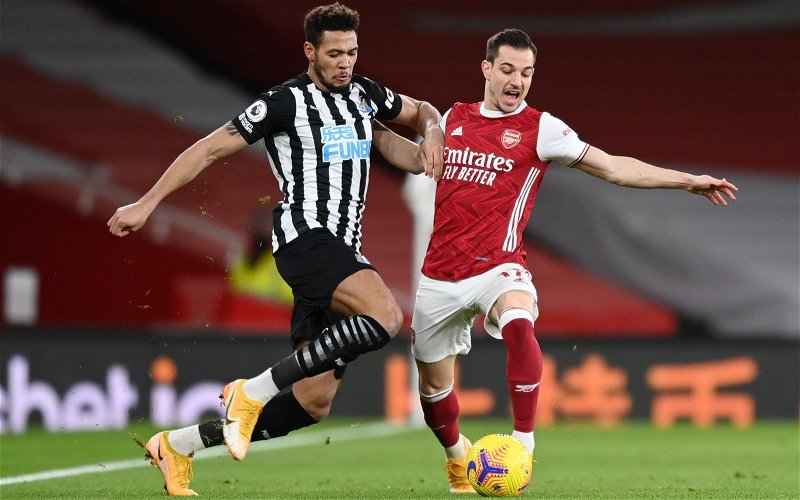 Joelinton is one of multiple Newcastle players who will be hoping to improve and under Eddie Howe, with the Brazilian forward struggling to impress  at St James’ Park since his 2019 move.

After becoming  the club’s record signing, costing a rather costly £40m, he was subsequently given the famous number nine, despite not being much of a prolific goalscorer.

However, Howe has revelated that he believes the Brazilian can be an integral player under his reign for the Magpies, believing the mercurial forward has a key role to play in Newcastle’s future.

“I think he can be a huge player for us, Howe said.

“From what I’ve seen in training he’s a technical player with very good feet and he’s intelligent. Unlocking that talent and ability are things I’m going to make assessments on but he’s got a big part in our future here.”

What did these Newcastle fans make of Howe’s comments on Joelinton?

“Looking forward to Jo picking up the Ballon D’or”

“At Hoffenheim he didn’t play as a striker, he played as a false 9 or a 10 who created more than he scored bc of his technical ability. he’s got potential, he’s just not a number 9”

“Big Joe is going to be the next Messi”

“Joelinton has been playing well for a while & we cant knock his injury record. Can Eddie bring the best out of him ? We have a player we just need to unlock his strengths & iron out the weaknesses”

To date, Joelinton has scored just six Premier League goals, while he’s also lost the number nine shirt, handing it over to talisman Callum Wilson who will reunite with Howe after their time at Bournemouth together.

However, we have seen signs of life from the 25-year-old this season. No longer leading the line on his own, Joelinton has had a much bigger impact from the left wing for the Magpies, and Howe will be hoping the Brazilian can rediscover his top form when his side take on Thomas Frank’s Brentford side at St. James Park at 3pm, with the Toon and Howe aiming to secure their first victory of the campaign.

Elsewhere, many Newcastle fans have been left fuming after  ‘jaw dropping’ claims emerge…