Former Premier League striker Dean Windass believes that Jesse Lingard is probably a player that Newcastle United would like to sign.

The Magpies have been looking for a new manager since parting ways with Steve Bruce, with journalist Fabrizio Romano reporting that the club are preparing the paperwork to appoint former Bournemouth manager Eddie Howe on a deal which will run until 2024.

Do you think Jesse Lingard will leave Manchester United in January? 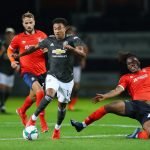 With the transfer window just under two months from opening, Newcastle and PIF will want to appoint a new manager so that they can assess the current squad and draw up a list of potential targets, with Windass naming Lingard as a player that the club would probably like.

“Listen, Jesse Lingard, yeah he wants to play, every player wants to play, and he’s probably a name that Newcastle will want to bring into the football club,” Windass told This is Futbol.

Lingard had a spell away from Old Trafford last season, as he moved to West Ham United on loan. During his time at the London Stadium, the 28-year-old made 16 appearances, scoring nine goals and registering five assists, and helped the Hammers to secure UEFA Europa League football for this term.

The Daily Mirror also reported last month that Lingard was prepared to depart Old Trafford in the winter transfer window to enhance his chances of playing for England at the World Cup next year and mentioned FC Barcelona and AC Milan as clubs interested in his signature.