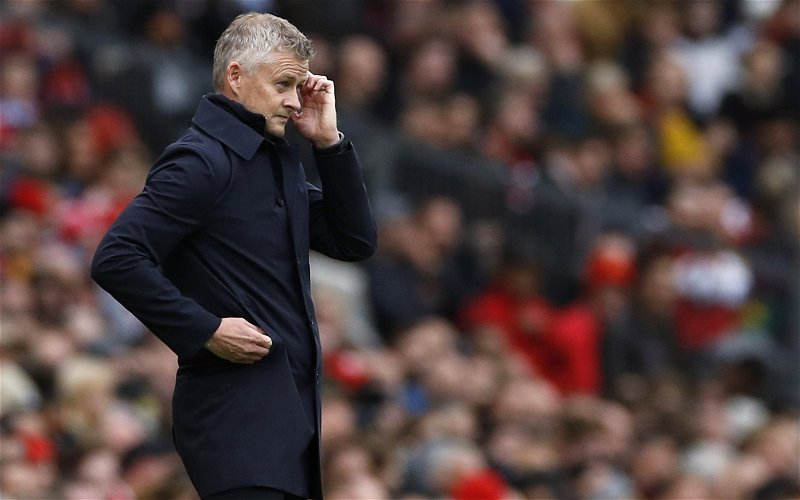 Presenter Mark Goldbridge has been speaking on The United Stand’s YouTube channel to discuss the club’s current managerial situation.

Ole Gunnar Solskjaer has come under pressure in recent weeks following a poor run of form which has the Red Devils sitting outside of the top-four by a five-point deficit.

Will Solskjaer still be manager at the end of the season?

One man who was claimed as being interested in a potential vacancy at Old Trafford was Antonio Conte, however, the Italian has since been appointed as the new Tottenham Hotspur manager.

Zinedine Zidane has also been linked with Solskjaer’s job recently, with the Frenchman currently out of work having departed Real Madrid in the summer.

However, ahead of United’s return to Premier League action after the latest international break with Solskjaer still in the dugout, Goldbridge had the following claim to make on the situation.

“As I’ve said before, and I was told this last week: if [Mauricio] Pochettino was available now, or Brendan Rodgers was available now – and what I mean by ‘available now’ is not managing Leicester and not managing PSG, you know, they’re on their holidays – then Solskjaer would be sacked and they would be the United manager right here, right now. United’s problem is the man that they want, they can’t get him now.”

Whether or not Goldbridge’s claim is true, it would at least point towards a potential explanation as to why Solskjaer remains as Manchester United boss – although that may, in turn, suggest that the club have acted too slowly to get a top-class replacement in.

We find it really difficult to understand how United have not pulled the trigger on relieving Solskjaer of his duties already this season in the middle of their recent poor form.

At the time, Conte was available to approach and as far as Fabrizio Romano is concerned, the 52-year-old was very much open to a potential opening at Old Trafford.

We think appointing a man who has won trophies at the likes of Chelsea, Juventus and Inter would certainly have been appreciated by the United faithful.

However, the club now finds itself in a position where Zidane is currently recognised by many as the ‘best available manager‘ and there are reports suggesting he is in no rush to return to football at the moment.