A lot of Leeds United fans have flocked to Twitter to share their thoughts on footage involving Raphinha to emerge from Thorp Arch ahead of their next Premier League clash.

The Whites tasted defeat in the capital on the weekend as their depleted side suffered a second-half comeback from Antonio Conte’s Tottenham Hotspur to steal the points.

Who was the bigger miss? 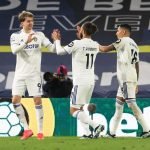 Marcelo Bielsa was without a number of his players through injury, with Rodrigo and Raphinha both absent for the trip to north London.

However, the two were pictured during the Leeds training session on Wednesday alongside Robin Koch and Jamie Shackleton as the club posted footage on their Twitter account, which saw fans share their unbridled joy.

What did these Leeds fans have to say about Raphinha?

“I’m getting my hopes up to be totally dashed when all four are still left out.”

@Ruby_N11
“Finalllyyyy some good news!!! Pat and Koch there. Raph shack and rod also training. Firpo too only one missing if I’m not mistaken is Ayling? That would be a massive boost… providing that Phillips’ bumped head stays on his shoulders”
@B_Huds0n
“Finally getting the players back we have desperately missed!”
@IDWakefield
“The news we need to get us through Wednesday”
@royceylufc
“A lot of good news in a short clip. Rapha back amongst the team. Paddy and Robin looking alright. Encouraged.”
@MrPMHarrison
“Koch, Bamford and Shack look to be back, Firpo at full strength and Raph and Rodrigo also ok, we are making a title charge this Christmas”
@Chris_Wriiight

And it is to little surprise the post received such a positive reaction given Raphinha has played such a big role in their season so far as he leads the way as the Whites’ top goalscorer.