Leeds United journalist Conor McGilligan has given his thoughts on young midfielder Joe Gelhardt and his place in the first team.

The 19-year-old moved to Elland Road in the summer of 2020 and spent his first season at the club with the U23 side, where he certainly made a name for himself within Leeds circles, scoring 11 goals in all competitions and helping the Under-23s win the Premier League 2 Division 2 title.

This year, he has taken a step further in his progression, making five appearances for the senior side so far, and even managed to earn his first start of the season this past weekend as he played 87 minutes against Tottenham Hotspur in their 2-1 defeat in north London, with a performance that has left some rather impressed and full of hope for his future.

Speaking on a live video on the Leeds United Live Facebook page, McGilligan talked about Gelhardt – nicknamed ‘Joffy’ – and explained how he wanted to see him playing in the side a lot more often moving forward, even at the expense of some of the more senior options when they are fit:

“I think he’s extremely gifted as well. And I think you saw yesterday with his first full debut how good he can be. And he’s dangerous him alongside Raphinha – imagine that for a full 90 and a full sustained period, there are definitely options there.” 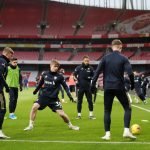 Gelhardt certainly put himself about during the game, completing five dribbles – which was the most of any player on the pitch on the day – completing 79% of his 19 passes and making one clearance (via WhoScored).

When you consider his age, the fact that it was his first Premier League start and that he was up against a side coached by one of the more successful managers in the modern era in Antonio Conte is really not bad going.

Given his prowess at a young level, his impressive debut in north London and his comparisons to former England captain Wayne Rooney, there certainly appears to be a decent player there for Leeds to use and it will certainly be interesting to see if Marcelo Bielsa agrees with McGilligan and that he can use him more often going forward.

Although, Leeds and others should be careful not to hype him up too much, because whilst he might possess some talent, too much pressure and praise at a young age before he’s really able to deliver could end up with him just being another statistic when it comes to players who weren’t able to live up to it.