Exclusive: David Norris hails Leeds United for the price they got Raphinha for

Leeds United got Raphinha for a great price, former Whites midfielder David Norris has told This Is Futbol.

In that 2020/21 Premier League campaign, the 24-year-old winger scored six goals and provided nine assists to help Marcelo Bielsa’s side to a ninth-placed finish.

Is Raphinha now worth more than £17m? 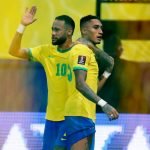 He has also impressed this season, particularly while on international duty with Brazil, heavily involved in their goals during their last round of World Cup qualifiers.

Overall, for Norris, it was a solid signing. “When you look at it now, it’s a great fee to have got him for,” the ex-Leeds player said to TIF.

It is a sentiment many are likely to share, including another former Leeds player in Tony Dorigo, who recently hailed the Brazil international in a piece for the Yorkshire Evening Post.

Leeds have had a really tough start to the season, failing to win any of their first six league games. But with Raphinha and Patrick Bamford, once the England striker is fully fit again, they will be hopeful of beating the drop this campaign.