Crystal Palace: Dan Cook would like to see Will Hughes start 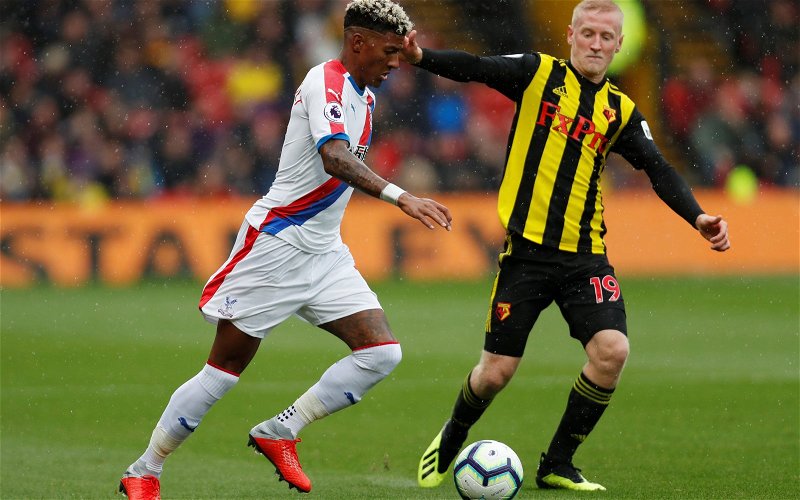 Dan Cook has been speaking on the HLTCO podcast about why he would like to see Will Hughes start for Crystal Palace.

The Eagles will have to face Leeds United this evening without either James McArthur or Joachim Andersen, who are both nursing hamstring injuries, and Patrick Vieira will be hoping the club’s fortunes turn without the pair after being beaten at home for the first time this season on Saturday. Vieira decided to hand starts to Cheikhou Kouyate and Luka Milivojevic last weekend, but with that experiment failing to yield a positive result, someone else may be handed a chance to impress, and that person could be Will Hughes, although his lack of minutes this term may go against him.

Cook believes there would be nothing to lose if Hughes was handed a start.

“I look at Luka, I think – as I’ve said on previous podcasts – he’s been over-trying of late and that’s been evident to me.

“If you look at our midfield performance and how weak we were particularly in the first half against Steven Gerrard and co on Saturday, there’s no harm in rolling the dice and seeing if Will Hughes can give you something different and something a bit extra in the midfield next to Conor Gallagher.

“There’s a huge workload being put on the Chelsea loanee’s shoulders week after week.”

TIF Thoughts on Will Hughes…

It is a very bizarre situation Hughes has found himself in as he joined Crystal Palace for £6.3 million over the summer but has clearly not been fancied by Vieira, with the manager yet to hand him a single minute in any competition, which does raise the question as to why was he signed.

There is fierce competition within Palace’s midfield department, but after starting both Milivojevic and Kouyate in the previous two fixtures – which has brought about one Premier League point, it may be time to switch things up, especially after only a few days to prepare for their next match.

In other news: ‘A headache for Patrick Vieira’ – Dan Cook drops ‘major’ concern for CPFC