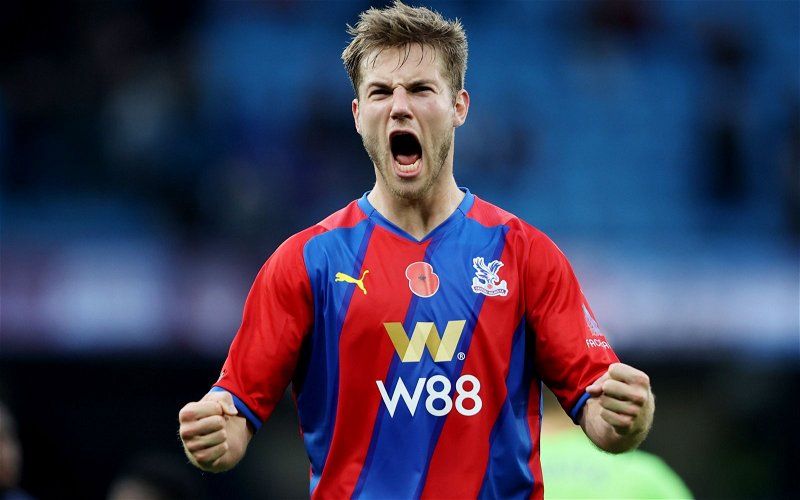 Dan Cook has been speaking on the HLTCO podcast about Joachim Andersen and the injury he has sustained.

All of the new arrivals that Patrick Vieira signed over the summer have managed to stay relatively injury-free. Although Michael Olise did arrive with a knock, everyone else has managed to feature regularly in the first team.

This has included the centre-back pairing of Marc Guehi and Andersen, with the pair having played in every league match since arriving in the summer, but that partnership could soon be shattered as Andersen has picked up an injury while away with the Denmark national side and has been sent back to Crystal Palace for further inspections.

Cook believes it would be an almighty blow for the Eagles to lose Andersen.

“As I say, we haven’t got a game now until the 20th of November, so you would hope that it is just a minor knock for Joachim and he has presented himself, made everyone in the Danish FA aware of it and they’ve sent him home with his best intentions at heart.

“Burnley away is a fair while away yet, you would hope that a period of rest will be enough for him to be fighting fit and ready to travel to Turf Moor.

“It would be a sizeable blow for us if he wasn’t able to partner Marc Guehi at the heart of our back four; he has been a real game-changer for us across the early part of the season.”

It would seemingly be a blow for Palace to lose Andersen, mainly because no other centre-back has started alongside Guehi in a Premier League game since the Chelsea defeat on the opening day, so they will have very little experience of playing alongside the 21-year old and that could potentially lead to lapses in concentration and mistakes creeping into the backline.

And with their next game being against Burnley, it could be safe to assume that Chris Wood may peel onto Guehi’s potential defensive partner.

It is not just what Andersen does in the defensive third that has been so impressive this season, but also how he is able to spread the ball up the pitch with such accuracy and willingness.

Andersen ranks inside the top two for both completed passes and progressive distance racked up while passing (as per FBRef), so it’s clear that Vieira wants his centre-backs to be courageous on the ball and to get it forward at any given opportunity.

If someone such as Cheikhou Kouyate comes into the side, then judging by his stats from last season of completing 959 passes, Vieira may have to rethink his style of play, as those stats don’t even come close to Andersen’s, who has already completed 592 in just 10 starts, so it’s obvious to see who is more comfortable on the ball.

In other news: ‘He could be Cheikhou Kouyate’s replacement’ – Dan Cook reacts as CPFC rumour emerges