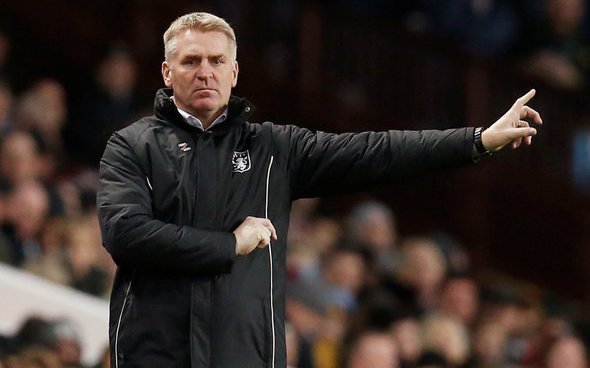 TalkSport pundit and former Aston Villa player Darren Bent has given his view on the future of Dean Smith following claims about his future at the club.

A run of poor results in the Premier League which has seen them lose four games in a row has meant that the Aston Villa boss is under a bit of pressure surrounding his job security, with some reports suggesting that the club have already ‘sounded out’ former AS Roma, FC Porto and Shakhtar Donetsk boss Paulo Fonseca as a potential replacement for him.

Bent, who made 72 appearances for the club, spoke about Smith’s job situation on TalkSport, saying that recent results might have started to take their toll on the side as well as the manager, and that he was a little concerned about whether or not Smith will be around much longer at Villa Park:

“The last four results, and I know they lost to Spurs, but the one against Wolves, I think from there, it looks like that the confidence has gone, the capitulation against Wolves at the very end, the three goals to lose 3-2, but they will be fine.

“But I just think Dean Smith, I’m a little bit worried about him in terms of his job, but I wouldn’t get rid of him because I think he’s done very, very well.”

This certainly can’t be the most pleasant time for Smith as it pertains to the Villa job, not only because of the bad run of form – but with the Fonseca rumours starting to pick up, he could end up being out of a job very soon, and it can’t be nice having to do your job with rumours circulating that the club are apparently lining up a replacement.

As Bent hints at, he has done an impressive job at Aston Villa, taking them out of the Championship, ensuring Premier League survival in their first season, before making great strides the following year and getting to a stage where the club were even beginning to think about European football in the near future.

So it would be a shame for him to lose his job off the back of one poor run of form while the season is still relatively young, and hopefully, he is given the chance to turn things around rather than being kicked out at the first sign of trouble.

In other news: ‘Surprised me massively’ – Journalist shocked after Dean Smith ‘mistake’ at AVFC