Over the summer, the Gunners spent big on a number of first-team signings such as Ben White, Martin Odegaard, Aaron Ramsdale, and Takehiro Tomiyasu.

One man who arrived with a little less fanfare was Portuguese left-back Tavares. Arsenal paid Benfica the relatively low fee of £8m to bring in the 21-year-old and it is already looking to be a fine piece of business.

While speaking on his YouTube channel, Watts sang the praises of the player, as well as the man responsible for bringing Tavares to the club.

He said: “He seems solid defensively, which is one thing that a lot of people were telling me he was very, very suspect at: was his defence and these lapses of concentration. So far, we haven’t really seen that.

“And going forward, he’s an absolute monster – does not stop getting up and down the left-hand side, and just looks like a really smart piece of business for only £8m.

“And you have to say the scouts and Edu, the technical department who identified him – you know, Mikel Arteta said he wanted a suitable young left-back to come in and be cover for Kieran Tierney.

“Edu and the technical department identified Nuno Tavares and brought him in for £8m. And right now, that looks like a very, very good piece of business. So you have to tip your hat to Edu for that one.”

In recent weeks, Tavares’ impact upon the team has really come into the spotlight. Indeed, with Tierney out injured, the 21-year-old has had big boots to fill.

He has done so, however, with great quality. The defender started in each of the club’s last two Premier League matches – games that Arsenal have won convincingly against Aston Villa and Leicester City. 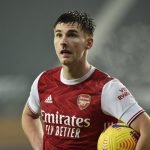 Last season, the Gunners really seemed to struggle without Tierney available. He was ‘badly missed’ at times, and Granit Xhaka even had to fill in that role during some of the club’s most important games of the previous campaign.

It will come as a great relief for Mikel Arteta to know he has an able deputy in that position he can rely on whenever his usual Scottish left-back is unavailable.