A whole host of Sheffield Wednesday fans on Twitter are buzzing after the club shared some Dominic Iorfa footage on Twitter.

The 26-year-old centre-back remained with the Owls following their relegation from the Championship into League One and then went one step further by committing his future to the club by signing a new two-year contract earlier in the season.

Is Darren Moore the right man for Sheffield Wednesday? 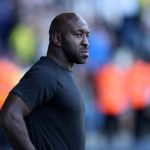 Iorfa has so far played 90 minutes in every single League One game for Wednesday this season, which has seen them keep five clean sheets in the league and only conceded more than two goals in a game once, which was to table-toppers Plymouth Argyle. Now, the club’s official Twitter account has compiled a video of Iorfa’s highlights at the back so far this season.

A lot of Wednesday fans on Twitter are loving this latest Iorfa video.

“Rolls Royce of a defender”

“Best defender we’ve had for years, if not one of the best defenders in all leagues besides prem”

“He genuinely is just unreal. How we managed to extend his contract I will never know. He is the reason we haven’t conceded that many goals this season”

“@DominicIorfa is an absolute boss”

“Our best player by a country mile”

A lot of these Wednesday fans feel very confident that Iorfa is a top defender and that he could or should be playing at a much higher level than League One, but especially in recent times, injuries have hampered him.

Darren Moore will be hoping that Wednesday can keep up their winning ways having recently beaten Bolton Wanderers, although that was only their second league victory in their previous seven matches.