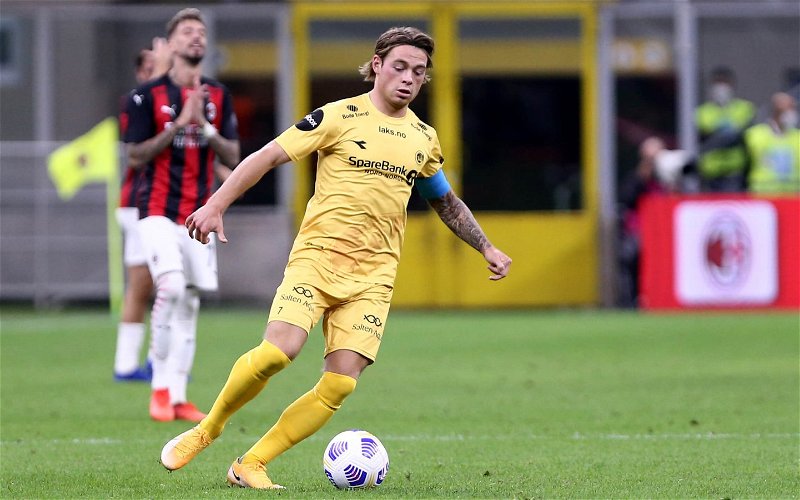 A score of Celtic fans have taken to Twitter to back the potential signing of Norway international Patrick Berg, with the midfielder available on a pre-contract agreement in January.

The Bodo/Glimt enforcer, who plays in his native country, was the subject of analysis from popular Celtic analytics page @BhoysAnalytics, who awarded the target an ‘A’ in terms of transfer suitability – their highest possible rating.

With Bodo/Glimt having recently humiliated Jose Mourinho’s AS Roma in a 6-1 defeat, Berg – who was linked with Celtic over the summer – was the subject of praise from fans.

“Will be a bit of interest from quite a few club, I would imagine now.”

”We could get the perfect player for free or go and spend 3-5 million on a 20 year Brazilian who will probably be another kouassi, you just know what the board will do”

“ Been saying it for almost a year now. Patrick Berg & Fredrik Björkan need to be seriously targeted by us.”

With the Norwegian topflight campaign ending in January and the player out of contract in the following window, striking a deal in the next window could be an ideal move for all parties.

Berg would add intensity and quality to Celtic’s deep-lying midfielder pool, and many fans clearly are enthused by the prospect of Berg signing on.

In other news: ‘Get him gone in Jan’, ‘Waste of a wage’ – Many Celtic fans react to pundit’s comments on summer signings