Journalist Stuart Hodge described the scouting of certain regions not up to what it should be, as the fact Kyogo Furuhashi was at Vissel Kobe is absolute madness to him.

The 26-year-old has been in inspired form for the Hoops since joining Celtic Park, scoring eight goals and providing one assist in eleven matches.

Manager Ange Postecoglou joined Celtic from J1 League side Yokohama F Marinos and so used his knowledge of the Japanese league to bring Furuhashi to the club.

Have you been impressed with Kyogo Furuhashi so far? 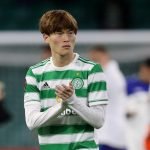 Hodge told This is Futbol: “It just goes to prove how, especially even in the modern era, sometimes the scouting of certain regions is just not up to what it should be because the fact he was at Vissel Kobe is absolute madness to me, especially the age he’s at because he’s not as young as a lot of people might think, but again that could play into Celtic’s favour and he’s happy to be playing at Celtic at the moment.”

Furuhashi signed a four-year deal with Celtic in the summer after a terrific season with Vissel Kobe, where he scored 16 goals and provided a further two assists in 22 appearances in all competitions.

After being impressed with Furuhashi, Postecoglou will look to the Japanese league in further transfer windows, telling the Scottish Sun: “Yeah, that’s one of the markets we will be looking at.”

After eight games of the Scottish Premiership campaign, Celtic find themselves sixth in the table on 13 points and you would imagine that everybody connected with the football club will be hoping that after the international break that the Hoops can put a good run of form together and that they climb the table.