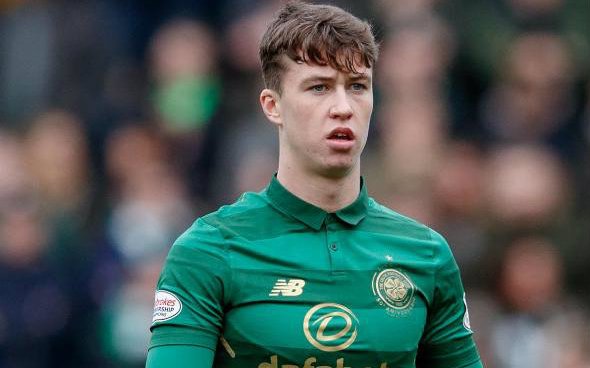 A load of Celtic fans have taken to Twitter to react to the performance of recently departed academy graduate Jack Hendry for Scotland.

Having been an outcast under Neil Lennon, the 26-year-old Scotland centre-half has enjoyed a renaissance in Belgian football.

The centre-back was on loan as KV Oostende last season with an option to buy and agreed terms on a three-year deal to make that switch permanent.

However, this was with a view to Oostende making a quick profit – something they achieved following Hendry’s sale to Belgian giants Club Brugge.

An established Belgian top-flight defender, Hendry has made waves for his country too. Moist notably, he set up Scott McTominay’s last-gasp Scotland winner in Scotland’s 3-2 win over Israel in their World Cup qualifier.

Many Celtic fans were quick to have their say on Hendry as a result.

“Is it Scottish soil that makes Jack Hendry lose all basic defending abilities?”

“Jack Hendry only plays well when nobody in Scotland is watching him.”

“Would help if our defence had more than 1 defender”

“Something in the tap water”

Some may rue Hendry’s departure following his resurgence on the continent, just as others are perplexed by his performances. Clearly, for many Celts the jury is very much still out on Jack Hendry.

In other news: ‘Then why did you give up trying’ – Lots of Celtic fans discuss ‘fraud’ who ‘downed tools’