A lot of Tottenham Hotspur fans have taken to Twitter to vent their frustrations with the club following their latest announcement.

On Friday, the club revealed their latest partnership with Madden 22 ahead of this weekend’s NFL London Games at the Tottenham Hotspur Stadium.

Are you a fan of the partnership with the NFL? 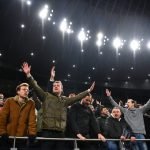 The club revealed the partnership with the Lilywhite’s home and third kit being introduced to Madden 22’s ‘The Yard’ game mode.

Spurs fans flocked to the post from the club’s official Twitter account as they vented their fury with the club now intertwined with the NFL across a number of means.

“I forgot we’re a football club”

@BennyBoiiTHFC
“There used to be a football club over there…”
@dylanrichards25
“I officially no longer support this club.”
@lemmonjack_
“This ‘club’ is a joke now.”
@Pat2THFC_
“This is hideous”
@J_R0G
“Levy selling us out again, only cares about the non football elements of the club. Also me…”
@Joycer1989
“Embarrassing. We’re becoming less and less of a club and more of a business”
@oJaayCo

The Tottenham Hotspur Stadium will host two NFL games this month with the first being this Sunday as the New York Jets face the Atalanta Falcons.

Despite the north London club having a contract with the NFL to help fund the construction of their stadium, it is apparent these fans were far from impressed by the latest partnership with the NFL.