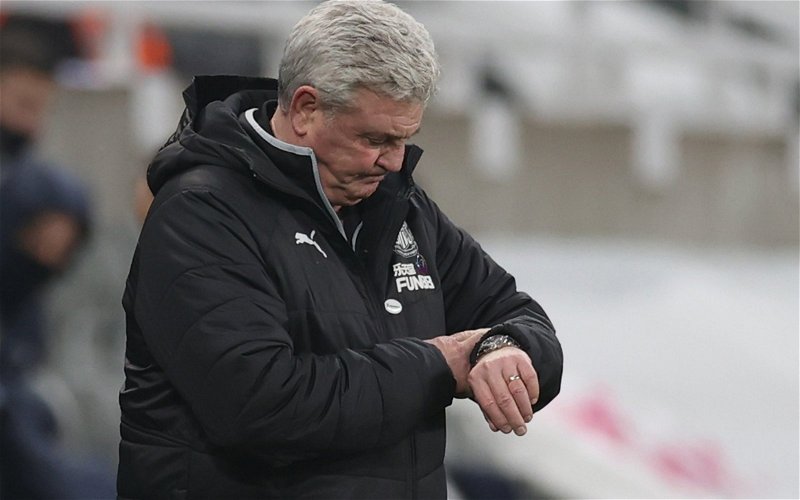 Speaking on The Transfer Window podcast, Duncan Castles has revealed what Newcastle United need to do before sacking Steve Bruce.

Despite claims from TalkSport backing Newcastle to let Bruce manage his 1,000th game against Tottenham Hotspur, with the club being winless and sitting second-bottom of the league, if he was to be sacked, the manager would likely have little complaints, while he is set for an £8 million payout.

Will Bruce be NUFC manager against Spurs?

Alongside his huge payday for being relieved of his duties, Bruce has also already stated in an interview that he would not be bitter if the new owners wanted him to leave his role as manager – and replacing him is the priority for PCP Capital Partners, according to Castles.

Despite more heavyweight managers such as Brendan Rodgers being linked with the hotseat at St. James’ Park, Castles revealed that the plan is to preserve Newcastle’s top-flight status – and the planned successor to Bruce will be sourced with this in mind.

He said: “They need to try and come to an agreement with Bruce over that compensation payment, try and negotiate the amount down at the same time as they look for a new manager.

“That search for a new manager is, I’m told, kind of an interesting one because they are not necessarily going to appoint the person they think is the candidate to take them where they want to go in English and European football now.

“What they feel is the priority for this season, given the position that Newcastle United are in – second-bottom of the league, yet to win a match – is to retain their Premier League status. So they want a coach who can come in immediately, deliver results and ensure they stay in the Premier League comfortably this season.”

Bruce has been receiving a lot of support from people on TalkSport, particularly Jim White, who has claimed that Newcastle fans couldn’t tell him some would do a better job than Bruce in terms of getting the club out of relegation trouble, however, having lost seven out of his last 37 games, that record would suggest differently.

Having taken training for three days in a row, Bruce and the players are on a scheduled day off this Thursday, and with the manager expected to conduct his pre-match media duties on Friday, this would likely be the last opportunity that the new owners would have to sack Bruce if he was to be gone before the match on Sunday.

In other news: ‘Oh my’, ‘Would be huge’, ‘We’re winning it all’ – Many NUFC fans buzz as update emerges