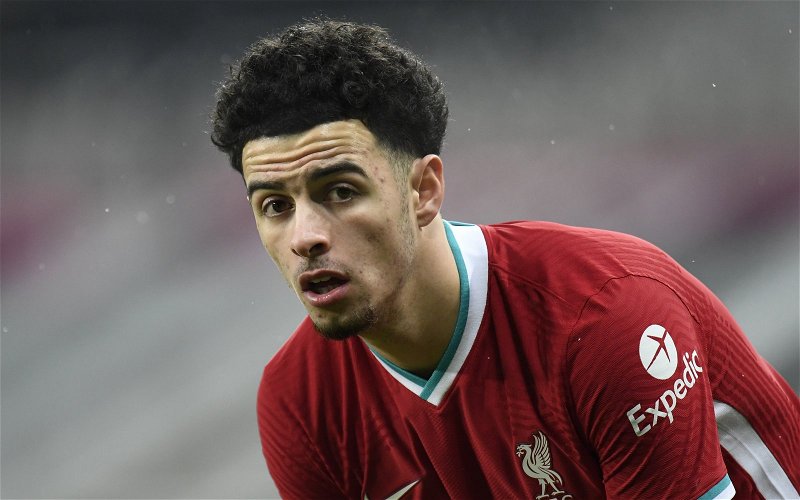 On the latest edition of Touchline Talk, The Redmen TV’s Paul Machin has been speaking about all things Liverpool ahead of the January transfer window.

One of the talking points was the impact youngster Curtis Jones has made on the Liverpool side amid the rise of Harvey Elliott in the early stages of the 2021/22 campaign.

Jones has now made three appearances in the Premier League for Jurgen Klopp’s side this term, in which he has been able to find the back of the net once, as well as providing an assist (via Transfermarkt).

Having not featured in the opening four games of the Premier League season, the midfielder has now started back-to-back league games.

With his latest start against champions Manchester City, Machin spoke of the youngster’s development under Klopp in recent months.

“It’s interesting because I think because as football fans, we’re a bit like magpies. We kind of get distracted by shiny, new things and you know everyone’s kind of going ‘ooh’ and cooing over Harvey Elliott and forgetting that Curtis Jones did I think the best part of 1,700-plus minutes for Liverpool last season.

“And that was more football than he maybe should have played, but he really stepped up for us as a young lad. Scored big goals for us as well, you know he gets assists.

“He’s really one to watch, and it’s interesting that the Elliott stuff might help him go under the radar a little bit, which I think will benefit him, because he could do with just really settling into the team.

“And the good thing about him is, I think he’s gone from being maybe last season, he was a consistent 6 or 7/10, which for a young lad’s great. We’ve seen 8s and 9s from him this season. If he can just put that consistency down, then we’ve got a hell of a player there.”

Despite being just 20 years old, Jones already has 53 first-team appearances to his name, which is a clear indication of Klopp’s faith in the young midfielder.

It is not just in the Premier League in which Jones has shown his ability. The midfielder starred in the Champions League clash against Porto last month as he helped himself to two assists.

Although they play in different positions, we agree with Machin’s comments on Jones potentially going slightly under the radar given the excitement surrounding the attack-minded Elliott.

It seems only natural for fans to be more excited about a tricky winger than a central midfielder, however, Jones has shown signs of being able to prove a threat for Liverpool going forward.

In other news: ‘Like signing a new player’ – Romano reveals Liverpool ‘priority’ in interesting update