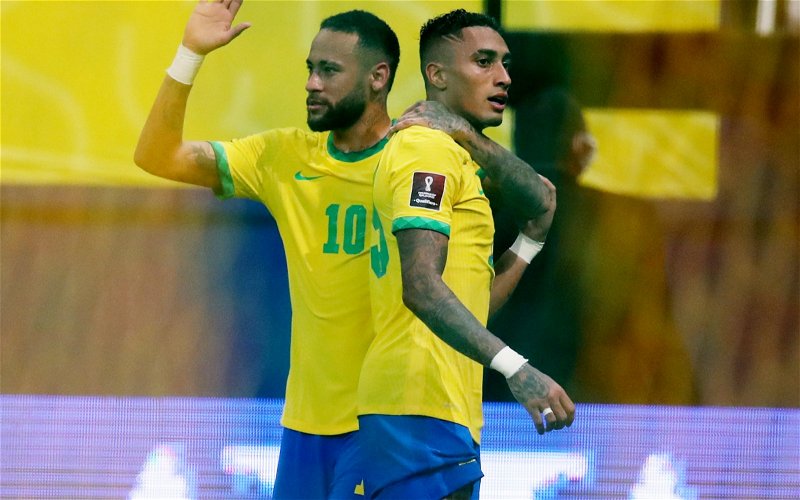 A number of Leeds United fans have been left extremely impressed after seeing Raphinha score for Brazil while on international duty.

In their most recent World Cup qualifier, the Leeds winger helped his country defeat Uruguay 4-1. Neymar opened the scoring before Raphinha stole the show, netting twice to make it 3-0. A consolation from Luis Suarez was then responded to by Gabriel Barbosa, who scored Brazil’s final goal.

Having featured off the bench twice already in this international break, this was the 24-year-old’s first-ever start for his nation – and it’s fair to say he impressed.

Footage of his second goal, in which he links up with Neymar, appeared on Twitter and it soon had many United fans expressing their excitement.

@BergenWhites
“Man he is some kind of talent. Made this whole attack, and finished the goal beautifully on his off-wing too”
@PhilOfSports
“What a boy.”
@JMunk2904
“Fantastic!”
@Zaid_ISN
“Fabulous.”
@dixonkeith44
“He’s special our Raph.”
@hhheatherrrc

It’s clear to see just how impressed these supporters are. Though Raphinha may have announced himself on the global stage, the Leeds faithful will be more than aware of his talent already.

Indeed, in his first season with the club, he managed six goals and nine assists in 30 Premier League games – this has quickly made him a fan favourite in Yorkshire.

After this latest performance, it certainly looks as if the 24-year-old is set to make it to the top.