The 22-year-old Club Brugge winger was linked with a move to Elland Road during the summer transfer window and Voetbal24 (via Sport Witness) claim the Whites could make a move for him in the new year.

Chasing a winger during the summer, Leeds brought in Wales international Dan James from Manchester United on deadline day, for a fee believed to be around £25m.

Considering that, Palmer can’t see the Whites spending too much on another attacker during the January transfer window, with Club Brugge said to want €30m (around £25m) for Lang.

Do you think Leeds will sign Noa Lang in January? 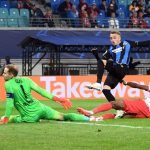 “So maybe they look for a loanee to bring in. I know they’ve been speaking to Liverpool and whatever and once clubs settle down, once it gets to around Christmas time, as you’ve seen before, Liverpool will let players go out on loan for the second half of the season and that might be something what Leeds United look to do,” Palmer told This is Futbol.

With the January window months away, the main thing for Leeds right now will be getting on a good run of form and trying to replicate last season where they finished 9th in the Premier League.