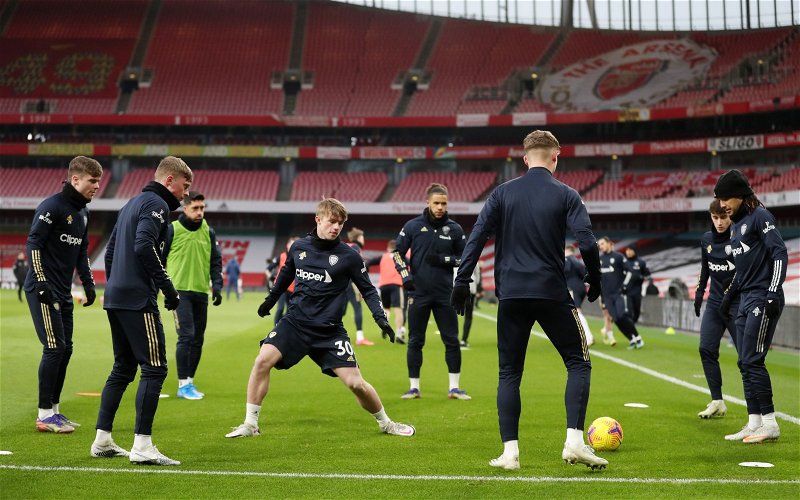 Phil Hay has been speaking on The Athletic’s Leeds United podcast about how Joe Gelhardt moved from Wigan Athletic to Elland Road and how much it really cost.

The 19-year old has been in fine form ever since he arrived at Leeds having scored 17 goals in total for the Whites’ under 23s and this season has seen him finally make his first-team debut in the Premier League two weeks ago against Southampton.

Gelhardt arrived from financially struggling Wigan in 2020 having made his debut for the Latics when he was just 16-years old and managed to score once for the Latics, as it appeared clear even then, that he would have a bright future and following his mazy run that ended up winning Leeds a penalty against Wolves last weekend, he looks like he could be ready for the top flight.

Hay has revealed how much Leeds paid for Gelhardt and how the striker felt about the move.

(26:36) “It was the administrators who set his valuation which I was told at the time was around about £700,000, but the initial fee was in the ballpark of £1 million, which everybody felt was a pittance really for someone as good as that.

“Wigan had a lot of very good youngsters over there but they certainly felt like he was one of the best of them, but because Wigan were in administration and Leeds can relate to this, they needed money, and ultimately cash was cash.

“They were getting offered some for Gelhardt, I don’t think Gelhardt particularly wanted to go because he was happy at Wigan but he realised that players were leaving in droves, good players were going in droves and that for his own development it was really important that he moved on.”

As it stands, Gelhardt will find it difficult to be handed starts in the league or even regular minutes because of how much Bielsa trusts and likes Patrick Bamford leading the line, but with Tyler Roberts only starting one league game this season and Rodrigo yet to score from open play, the youngster may be handed more minutes than expected for as long as Bamford remains on the sidelines.

It was a blow for Leeds midweek when they crashed out of the Carabao Cup at the hands of Arsenal, but even more so to players such as Gelhardt as he had featured in the previous two matches, so now he may feel his first-team opportunities are going to be sparse going forward.

Given Bamford is now 28-years old, Gelhardt could be granted more regular top-flight action so Leeds may already have a potential replacement or if Bamford ultimately can’t carry out Bielsa’s high-intensity instructions anymore.

In other news: ‘Oh my’, ‘Finally’, ‘Come onnnnnnnnn’ – Many Leeds fans erupt as ‘huge’ news emerges