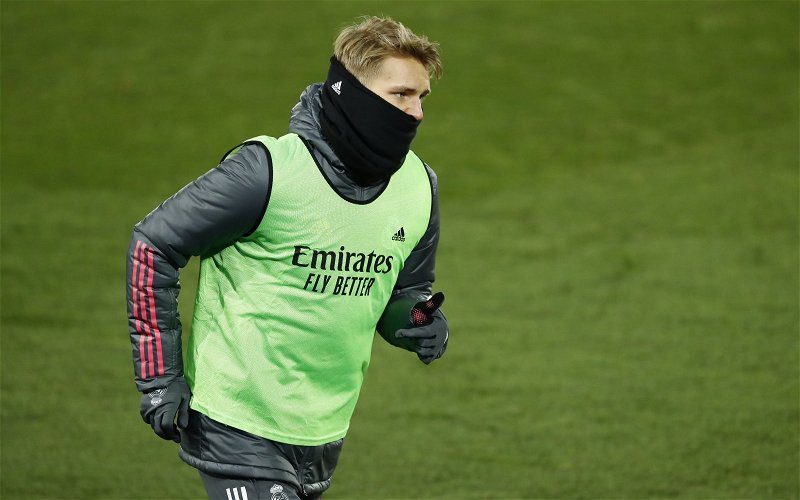 The Athletic’s James McNicholas has offered up a critical assessment of Martin Odegaard after another poor performance for Arsenal.

In their last Premier League outing, the Gunners had to settle for a 2-2 draw with Crystal Palace. Although they started the game brightly and went ahead thanks to a Pierre-Emerick Aubameyang goal, Arsenal struggled to dominate the match.

A last-minute equaliser from Alexandre Lacazette bailed Mikel Arteta’s men out after goals from Christian Benteke and Odsonne Edouard had put Palace into the lead.

Throughout the game, Odegaard failed to make much of an impact and was withdrawn in the 67th minute as a consequence. It had been a similar story in the club’s last match, when the Norwegian was subbed (after 63 minutes) in the 0-0 draw against Brighton & Hove Albion.

Speaking after the most recent draw, on his YouTube channel, McNicholas claimed the 22-year-old had been ‘invisible’ once more.

He said: “Martin Odegaard, pretty invisible tonight. And the second game in a row, I think he’s been the first substitution – first unforced change – Saka was the first change.

Odegaard evidently impressed Arteta and co enough during his loan spell last season to convince the club to splash out an initial fee of £3om to sign him from Real Madrid in the summer.

So far this season, he has shown glimpses of the quality. A free-kick against Burnley was a great example of this, while he also impressed in the north London derby win against Tottenham Hotspur.

Will Martin Odegaard be a hit at Arsenal?

Still, as McNicholas suggests, his uninspired performances in Arsenal’s past two games are of concern – especially as the Gunners have been unable to claim full points from either outing.

In other news: “That would influence you” – Exclusive: Pundit drops verdict on Aston Villa star amid exit claim