Lots of Tottenham Hotspur fans have been reacting on Twitter to the latest transfer claim to emerge following their defeat on the weekend to Crystal Palace.

According to a Spanish outlet, the north London club are monitoring the situation of Ajax midfielder Ryan Gravenberch as they look to strengthen their options for next season.

Do Spurs need to strengthen their midfield? 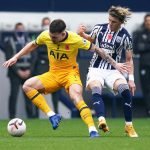 Gravenberch currently has two years remaining on his deal with the Amsterdam side meaning if he is not tied down to a contract extension he will enter next summer’s window with just one year remaining.

The report suggests the Lilywhites will look to either make an offer next summer for the midfielder or, alternatively, look to pick him up as a free agent in the summer of 2023.

Spurs fans flocked to the tweet from The Spurs Express to share their thoughts at being linked to the player so soon after the closure of this summer’s window.

“Would be a fantastic signing”

@xAlexTHFC
“Oh Paratici”
@KevinSSquared
“Now we pray”
@eriokram
“Oh wow yes please”
@THFCJakee
“Please @SpursOfficial if there is any shred of truth to this make it happen this guy is phenomenal.”
@josh_bollom
“We can dream”
@UrThroughToCoz
“Not 100% sure on the source but this guy is a serious player”
@Wesso10

The youngster made an impressive 32 appearances for Erik ten Hag’s side in the Eredivisie last season in which he was able to score three times and provide five assists (via Transfermarkt).

Despite the reported interest in the midfielder not expected to heat up until at least next summer, it is apparent these Tottenham fans would love to see the Dutchman become a Tottenham player.