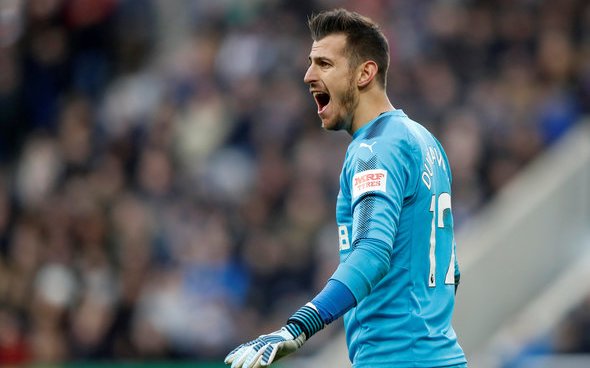 Manager Steve Bruce held his pre-match press conference on Thursday ahead of their home clash against Leeds United and the 60-year-old provided an update on Martin Dubravka’s fitness.

Will NUFC beat Leeds on Friday?

“He’s coming along nicely. The wound which was badly infected has gone. He’s hoping to be back out on the grass next week which is good news for everyone,” Bruce said on Dubravka’s injury.

Dubravka has missed all of the Toon’s games so far this season after suffering an infection following surgery undergone during the off-season.

“This is HUGE news!”

The Tyneside club have also been hit by the absence of Dubravka’s backup, Karl Darlow, with the Englishman suffering long-term effects of the virus.

With the Magpies currently sitting second-bottom in the table, it is clear to see these fans are desperate for their first-choice goalkeeper to return from his injury.

In other news: ‘Oh no’, ‘May as well forfeit the game now’ – Many NUFC fans fume over news ahead of Leeds clash