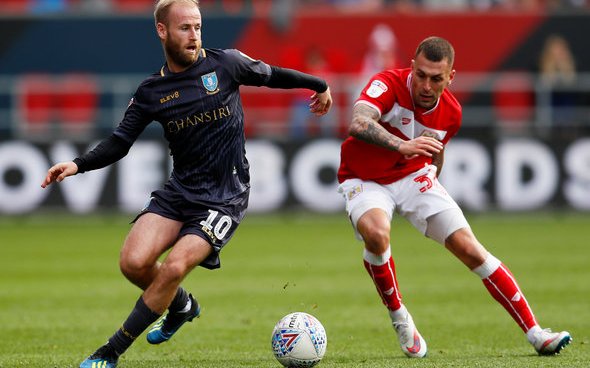 Sheffield Wednesday fans on Twitter have been reacting to a recent video to emerge on social media of Owls midfielder Barry Bannan.

This comes after the official Wednesday Twitter account shared a post on its page that contained footage from one of the club’s recent training sessions, showing a number of their players involved in a shooting drill.

Specifically, the footage showed Bannan taking a shot where he delicately lifted the ball up in the air for it to land in the goal, leaving the goalkeeper with no chance of saving it.

This post then gathered a lot of replies from Owls supporters who were not shy in sharing their thoughts on the matter.

So, what did these Wednesday fans have to say in response to this footage of Bannan in training?

“Behave Bazza, that poor lad’s got a family.”

“And still we have fans that don’t rate the bloke”

Looking at the replies to this post, it’s clear to see that these Wednesday fans were very impressed with what they saw from Bannan in this recent training session.

Taking into account that despite having played over 400 games throughout his senior club career, Bannan has only managed to score 19 goals, this suggests putting the ball in the back of the net hasn’t been a very regular occurrence for him, which could be why these responding fans have been so amazed by this recent footage.

However, given how the 31-year-old has already grabbed a goal in League One so far this season during Wednesday’s 2-0 win over Doncaster Rovers earlier in the campaign, it will be interesting to see whether or not the midfielder can add some more to his tally before the end of the season.

In other news: ‘This has made my day’, ‘Outstanding’ – Many SWFC fans buzz over update