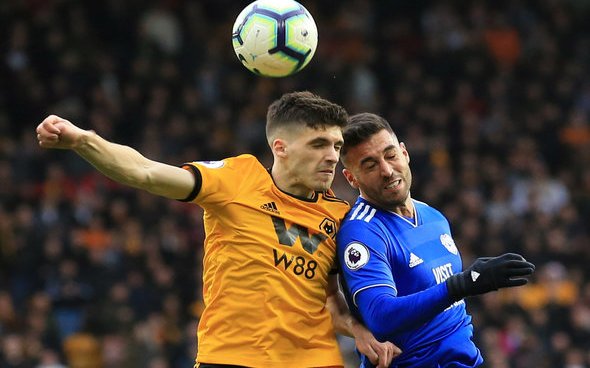 Wolves journalist Liam Keen has provided an update on the future of defender Rúben Vinagre.

The Portuguese left-back has been something of a bit-part player over the years at Wolves, as he was never really able to get a consistent run of playing time – made particularly difficult with the number of people that the club have in his position.

He spent the majority of last season out on loan, firstly at Olympiacos in Greece and then at FC Famalicão in Portugal, and has since joined Sporting on a season-long loan, with the club noting that the Portuguese champions have “the option to acquire the player next summer on a permanent basis”.

Speaking on the latest edition of the E&S Wolves podcast, Keen discussed some of the details surrounding the deal, and revealed that for all intents and purposes, it might as well be considered a permanent deal given the clauses in the contract:

“It’s fairly obvious to people anyway, but I’ll say it, that Sporting are exceptionally unlikely to get relegated. They’re one of the bigger clubs in Portugal alongside Porto and Benfica. So it’s very, very unlikely that they would go down, which essentially means that Vinagre’s gone.

“I think the attitude really from the club’s side is that in their mind, he’s a permanent Sporting player, really, even though officially it’s a loan at the moment because the likelihood of them going down is so minimal.

“Obviously, you never say never in football, but it’s so minimal that essentially, he’s going to be signed permanently there. So as far as I understand, that’s the situation, so I wouldn’t expect to see him back in a Wolves shirt.”

It certainly is a rather bizarre clause to be put in the contract, especially given the size of Sporting and their place in the ‘big three’ of Portuguese football, combined with the fact that they have just come off the back of a title-winning season.

So as Keen says, you can more or less consider this as a permanent deal, so the club should really start thinking about how they are going to invest the expected transfer fee coming their way.

It does make you wonder why they didn’t just make the deal permanent there and then rather than having to go through the rigmarole of waiting for a seemingly inevitable outcome to happen next summer.