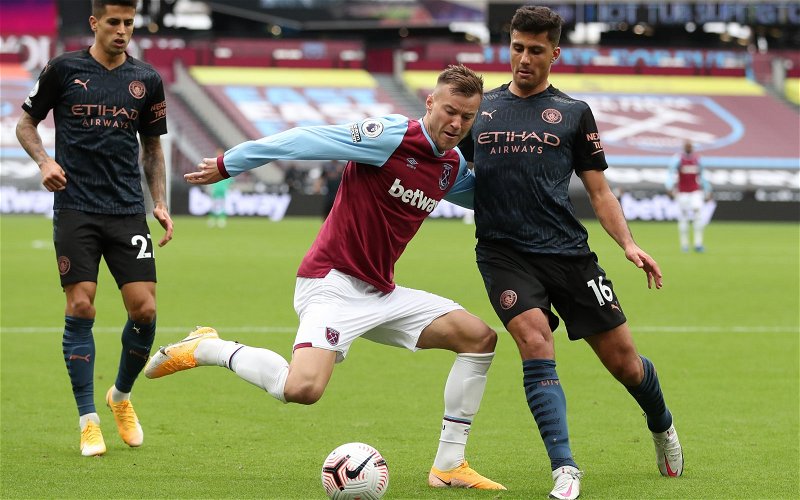 West Ham United insider @ExWHUemployee has been sharing some details concerning Hammers winger Andriy Yarmolenko and his future at the east London club.

This comes after Ex co-hosted a recent edition of The West Ham Way Podcast, where he spoke about a variety of subjects concerning David Moyes’ team.

During the podcast, Ex was asked what the chances of Yarmolenko being moved on from the club either in January or the next summer transfer window.

In response, Ex had this to say on the matter.

“So obviously, if you’re not performing in the Premier League, you’re also in your 30s and you’ve got a bit of an injury-prone record, there’s not going to be many particular takers for you.

“So whilst you can try to agree a deal with a club that you might finance half the wages, perhaps to get him off, there’s not going to be that many takers.

“I think with [qualifying for] Europe, they probably made the decision that against European teams with his experience and when a game’s perhaps a little bit slower, and some of the climates, like in eastern Europe, particularly, he might be a bit more used to.

“They made the decision that perhaps this season, he could be a good squad player and then try and deal with his situation at the end of the year, again.”

West Ham signed Yarmolenko back in the 2018 summer transfer window from German club Borussia Dortmund for a fee of £18 million.

Since then, the 31-year-old, who is currently valued at £3.6 million according to Transfermarkt, has made 62 appearances for the club across all competitions in which he has managed to score 10 goals and provide six assists along the way.

Given how Yarmolenko has only played 33 minutes of Premier League action for West Ham so far this season, this suggests that he is not a crucial figure for Moyes other than being a late substitute in their league games anyway, which makes it understandable why the club could well be interested in getting him off their wage bill and out of the club in January or in the summer.

Do you think West Ham should get rid of Yarmolenko?

In our view, unless the winger would be willing to lower his wages so he could move to a club where he may be able to play regular football, then West Ham run the risk of having him see out his contract and leaving as a free agent, when they would presumably prefer to get some money for him.