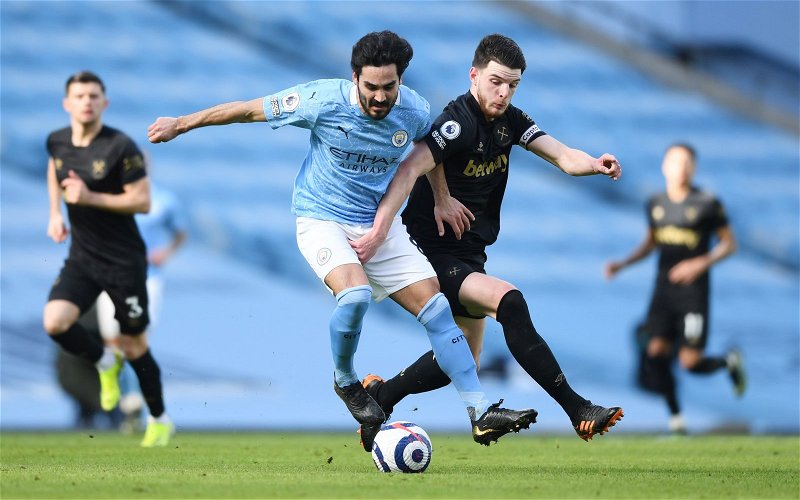 Former Premier League star Michael Ball insists that West Ham United midfielder Declan Rice is likely to be a target for every top club in the Premier League.

The Hammers have enjoyed a reasonable start to the season, although their first defeat of the campaign was recorded earlier this month, when the Irons lost 2-1 to Manchester United, but they bounced back with a victory by the same scoreline againts Leeds United on Saturday.

Even the former loss came in remarkable circumstances, as the Irons actually took the lead at the London Stadium through Said Benrahma, only to see it cancelled out by Cristiano Ronaldo.

Former Hammers loanee Jesse Lingard scored the winner in the final minute of normal time but the Hammers then won a penalty, after Luke Shaw’s handball, and Mark Noble was substituted on to take the kick, only to see it saved by David de Gea.

Rice played a key role in West Ham’s performance, dominating the midfield as he has done in recent months for both the Hammers and England – it was his run from deep that eventually led to Michail Antonio’s winner at Elland Road.

The midfielder has been linked with United and Manchester City this month, and Ball thinks that there will be a queue of clubs lining up to bid for the star this summer.

He said: “Declan Rice is a player that West Ham fans rate highly but I think other sides weren’t too sure, but over the last 18 months I think he’s showed what type of player he is, and the quality he’s got, the adaptations he plays as well; he can sit, he can drive, he has got more to his game than where West Ham use him.

“He’s a huge talent so players like that, the big boys are always going to want them, but it’s all about finances.”