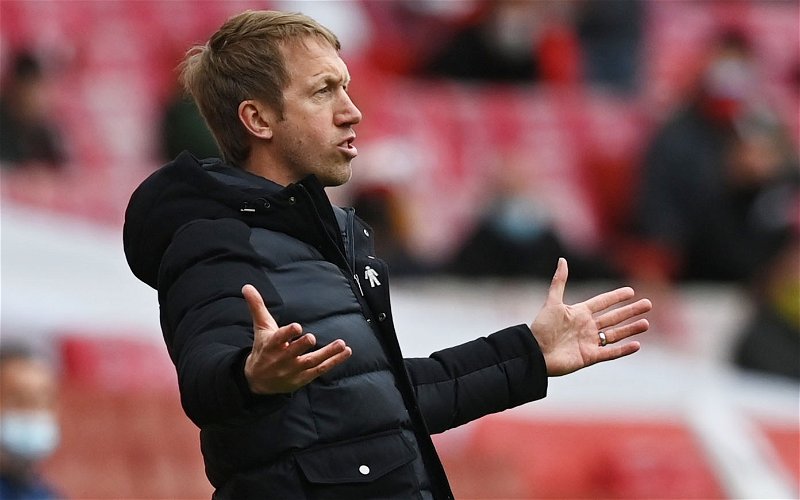 A lot of Tottenham Hotspur fans are fuming on Twitter after it emerged that Graham Potter was not interested in the managerial job over the summer.

Spurs decided to part ways with former manager Jose Mourinho only a few days before last season’s League Cup final against Manchester City and they eventually ended up appointing his fellow countryman Nuno Espirito Santo, although he may not be in the hotseat for much longer, with The Sun claiming that he’s already fighting to avoid the sack.

Someone that was reportedly recommended to Daniel Levy as a potential candidate by Steve Hitchen was Brighton manager Graham Potter, but now it’s emerged that he had ‘no intention‘ of taking up the vacant position, according to The Telegraph.

Many Spurs fans are fuming on Twitter that Potter had no intention of joining them.

“Says absolutely all you need to know”

“Don’t blame him. Daniel Levy is destroying this club who would wanna work for him”

“Can we all get back to #levyout now, he’s really destroyed this club.”

“People don’t realise how bad this actually is. With all due respect to Brighton, they’re a smaller club than Tottenham, yet Potter still rejected us to stay there. That is so, so damning.”

It has been two very contrasting fortunes for Tottenham and Brighton this season, with the Seagulls pushing at the right end of the table, and being able to keep hold of players such as Lewis Dunk and Yves Bissouma is a testament to how well they are doing under Potter both on and off the pitch.

The Seagulls were battling relegation for the majority of last season, although they did finish 16th and 13 points above the bottom three, however, their expected goals total suggested that they certainly underperformed in that area, with the metric suggesting that they should have scored 51.6 goals instead of just the 40 they did manage (FBRef).