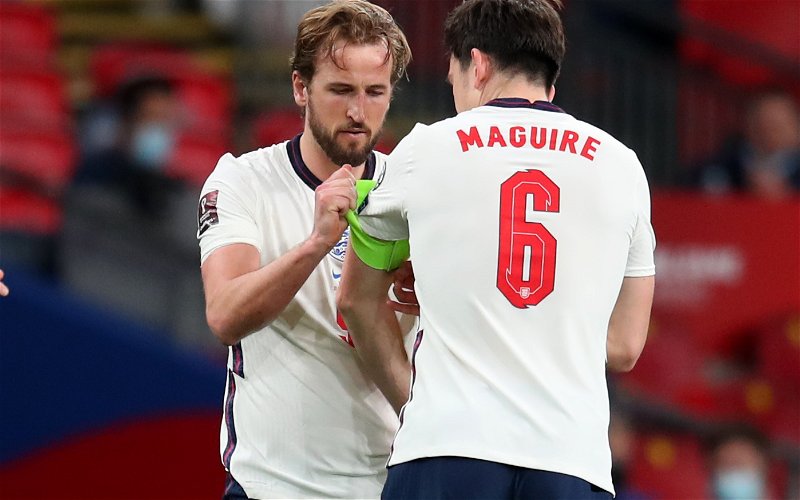 A lot of international fans have taken to Twitter to voice their frustration with Tottenham Hotspur striker Harry Kane over his performance for England against Hungary.

The Three Lions took on Hungary in Budapest on Thursday night in their latest 2022 World Cup qualifier in which the 28-year-old captained Gareth Southgate’s side.

Should Spurs have taken Manchester City's final offer for Kane?

Kane netted four times during the summer’s European Championship, however, prior to the recent clash, he had only found the back of the net in the Europa Conference League for Spurs thus far this season (via Transfermarkt).

The 28-year-old was able to double England’s lead in the second half after heading home Raheem Sterling’s cross to put the Three Lions 2-0 to the good.

Having missed a golden opportunity in the second half of the game at the Puskas Arena, international fans flocked to Twitter to share their anger with the England captain.

“Anything to change it. For me Kane offers nothing”

@ads65326323
“Mount and Kane been absolutely awful”
@jacksol1990
“Kane has been really poor tonight. As has Walker”
@Broggybroggs
“All I have seen from England games since the Euros is that Kane is massively overrated”
@NathanFripp1
“Kane is finished”
@rrr1999
“Come back from football to Harry Kane missing… he’s a fraud”
@jistheway1
“Kane is criminally overrated”
@adamaRFC
“Kane’s finishing has been absolutely abysmal”
@Utd_Olly15

The England captain is being integrated back into Nuno Espirito Santo’s starting XI following a summer of speculation as to whether he would remain with the north London side.

Despite getting his name on the scoresheet in the 63rd minute, it was apparent to see not all of these fans were left impressed with the Tottenham man’s display.

In other news: ‘What I’m told’ – Alasdair Gold reveals what ‘people in Tottenham’ have said about Ndombele