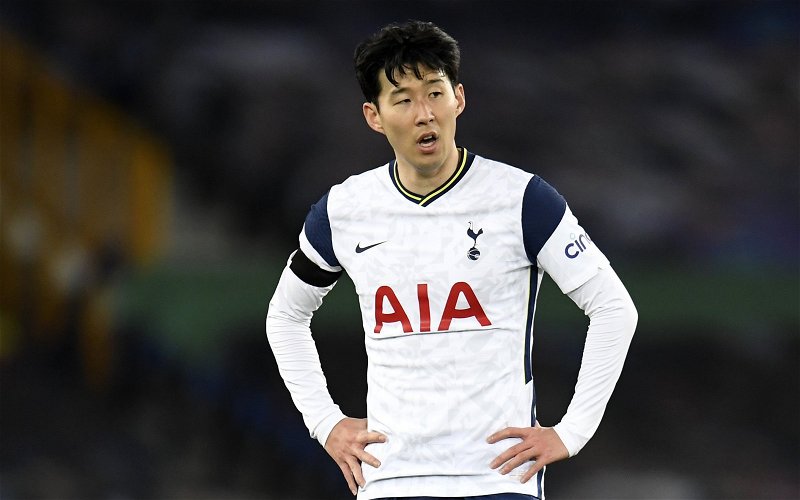 A whole host of Tottenham Hotspur fans are furious on Twitter with Alasdair Gold’s injury update.

It was a disastrous end to an unfortunate couple of weeks for Tottenham as they went down 3-0 away to Crystal Palace which saw them lose Eric Dier after 12 minutes and also didn’t have Son Heung-min, Steven Bergwijn, Cristian Romero, Giovani Lo Celso or Davinson Sanchez due to their issues over the international break.

In terms of Son and Dier, Gold has reported that they are not expected to be fit in time to face Chelsea this weekend, although Bergwijn is expected to be in contention to feature in some capacity, although being without Son and Dier will be a huge blow for Nuno Espirito Santo.

A lot of Tottenham fans are gutted on Twitter with Gold’s latest update.

“Brilliant a winger that doesn’t can’t score or assist. We might be worse than we were against palace”

“I give up already on this season”

“Not looking good for Chelsea match”

“Games a right off even with everyone fit ,concentrate getting them fit for arsenal”

“Coming off for a dead leg sums up the soft underbelly of this club.. embarrassing”

Son had been in fine form for Spurs before he picked up an injury away on international duty with South Korea, having scored in two of the club’s three opening Premier League games so to be without their top scorer for a big game against Chelsea is a massive blow.

Considering how Romelu Lukaku has taken to life the second time around at Stamford Bridge, it’s understandable why many fans are annoyed that Dier is unlikely to recover in time for the derby match because it would likely leave the possibility of Ben Davies starting in a back three and given he’s a full back, it’s someone Lukaku would likely peel off onto during the game.