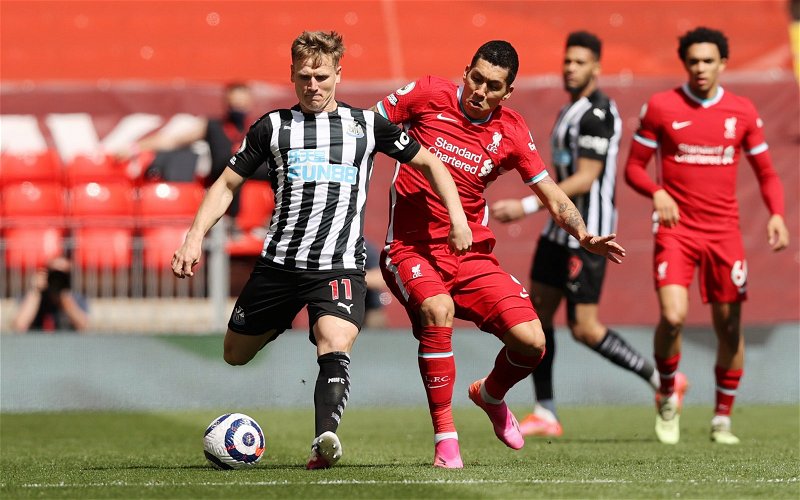 Chris Waugh has been speaking about Steve Bruce’s comments on Matt Ritchie on the latest Pod on the Tyne podcast.

When Ritchie joined Newcastle in the Championship back in 2016 under Rafael Benitez, the former Bournemouth man was brought in as a winger, but last season saw him deployed as a wing-back and full-back, which has also continued into this campaign.

Ritchie has started every league game this season on the left-hand side – usually in a wing-back role – and although Bruce did opt for four at the back against Watford, Ritchie kept his place, and now Waugh has confirmed that Bruce told him that he doesn’t see much difference between playing as a wing-back and a full-back.

Ritchie and Bruce’s comments were discussed by Waugh on the podcast.

He said: “I asked Steve Bruce on Friday before Newcastle had shifted to the four [at the back] permanently; I asked him whether Matt Ritchie was someone he would consider playing in a back four or whether he’d done that against Leeds because it shifted within the game.

“His response was basically in the modern game, in his opinion, there isn’t too much difference between left wing-back and left-back – that’s paraphrasing, that was sort of what he said, and I was a little bit taken aback by that.

“He did play Matt Ritchie on Saturday, and I was a little bit shocked that after [Ismaila] Sarr drew a booking out of him in the first 15 minutes, that they didn’t really try to run down his channel again, because both full-backs actually were booked quite early on.

“I am concerned when he comes up against better opposition, him playing as a left-back.”

Ritchie has become a very reliable player within Bruce’s squad, despite going 12 games midway through the previous campaign only featuring for 18 minutes, and reportedly having a training ground bust-up with Bruce last season.

The Scotsman’s ability to play in a number of different positions on both sides of the pitch is very beneficial for Bruce, who clearly doesn’t trust a more natural option in £15 million left-back Jamal Lewis, with the former Norwich city man having featured for all of six minutes in the league this season.

It’s been a standout season for Ritchie individually thus far, as he currently ranks joint-11th in the entire league for the most shot-creating actions with 11, although he only actually has one assist to his name in the league.