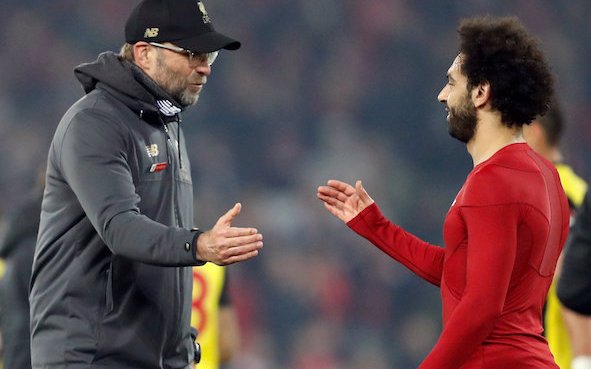 Football journalist Mark Jones has been sharing his thoughts on Liverpool winger Mohamed Salah and the possibility of him signing a new deal at the Merseyside club.

This comes after Jones made an appearance on a recent video from the Mirror Football YouTube channel where he spoke about a range of topics concerning a variety of clubs in the Premier League.

After it was recently reported that Liverpool are working on getting the winger to sign a new contract with the Reds, Jones had this to say on the matter. (6.50)

He said: “He can be a force of nature, really.

“I mean, in terms of his future as well, I mean, I think he’s probably missed that boat in terms of a potential move to Real Madrid or Barcelona.

“I know there are contract negotiations still going on, but I expect him to sign one pretty soon and he’ll go on and get even more goals.”

Since arriving at Liverpool from Italian side AS Roma back in the 2017 summer transfer window for a fee of £37.8 million, the 29-year-old has made a total of 207 appearances for Jurgen Klopp’s side across all competitions in which he has managed to score 128 goals and provide 49 assists in the process.

Is Mohamed Salah the best player in the Premier League?

Considering how the Egyptian recently reached his 100th Premier League goal for Liverpool during their recent 3-0 win over Leeds United, it’s easy to see why the Merseyside club are looking to tie the winger down to a new deal even though his current contract isn’t set to expire until the summer of 2023.

Moving forward, if Salah does end up signing a new contract at Liverpool, as Jones seems to think he will do, this would be a great move from the club to secure one of their best attacking players for the foreseeable future, as they have done with other players this summer such as Alisson Becker, Trent Alexander-Arnold, Fabinho, Jordan Henderson, Andy Robertson and Virgil van Dijk among others.

In other news: ‘You absolutely wouldn’t rule out’ – Journalist drops Liverpool claim