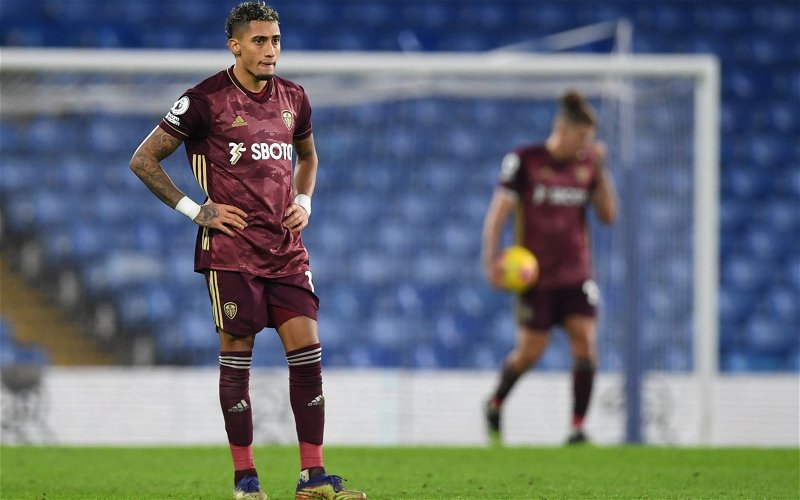 Phil Hay has been speaking on The Phil Hay Show podcast about how Raphinha may change his role at Leeds.

Last summer’s transfer window saw Leeds sign a winger on deadline day when Raphinha arrived from Rennes, and it seemed like history repeated itself as they brought in Daniel James from Manchester United prior to the 11pm cut-off, however, it remains to be seen how the Brazilian, James and Jack Harrison will fit into one team.

With three top-quality wingers now at the club, Marcelo Bielsa will constantly have a selection headache as to which two wingers start in the Premier League, but if he bases it off last season’s performances, James may struggle to dislodge either Harrison or Raphinha given their attacking outputs compared to the Welsh international’s.

Hay offered an insight into how Bielsa may go about balancing his new winger options.

“He [James] probably starts on the bench, doesn’t he, behind Raphinha [and] behind Jack Harrison – they seem pretty well-established. But we’ll wait to see whether or not there’s any effort made to convert somebody like Raphinha into a 10.

“From what I can gather, that is on Bielsa’s mind, but I think it would take a heck of a lot of coaching and I think it would be a longer-term process. Raphinha doesn’t instantly look to me like a Bielsa player in that two behind Patrick Bamford.

“It always feels like a little bit closer to an 8 than it is to an out-and-out number 10, who plays solely as a 10, but perhaps it can be done, and I mean, Raphinha, his range of skills are exceptional.”

Considering how effective Raphinha was last campaign, especially in the way of teeing up his teammates as he registered nine assists – the most in the entire squad – bringing him inside to play as more of a number eight as Hay hints could happen, might nullify his ability to beat players and create as many goals.

The best thing about Raphinha is his willingness to dribble, as he attempted 118 last season, which was the most at the club (via FBRef), which highlights his willingness to get at full-backs, whereas if he was brought more centrally, then he could have more players looking to tackle and mark him out of games.

However, if Bielsa can coach him into finding the pockets of spaces in behind a striker, then it could be deadly having Harrison, James, Raphinha and Patrick Bamford all on the pitch at once.