On Tuesday, the Leeds midfielder was named as the England national team’s Player of the Year following his efforts in this summer’s European Championship.

Did Phillips deserve this award? 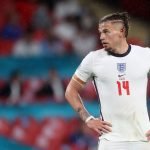 The 25-year-old made seven appearances in the Three Lions’ journey to the final in the summer and provided the assist for the opening goal of their tournament against Croatia (via Transfermarkt).

Phillips now has 15 England caps to his name and following the announcement of his achievement, Leeds fans flooded to share their congratulations for their midfielder.

“This is class. Well deserved. What a top lad. Nice to have an Irish lad present it too…“

@daveok1919
“Buzzing for the lad #YP #LUFC“
@MrLThirlwall
“I’m not crying you are”
@DeedoLUFC
“Absolutely superb…..what a man!”
@HantsCastiger
“Wow. That boy has had some rise, hasn’t he? Much deserved, though”
@MOTweets1919
“Look at the boy!! LOOK AT HIM!!! My heart is full.”
@sarahlufc_x
“This is magnificent”
@SporcoLeeds
“That’s truly amazing. What an unbelievable 4 years this lad has had!”
@JamieLee76
“This is brilliant!”
@DLo79

Leeds have had a shaky start to the new Premier League campaign with just two points from their opening three games, however, Phillips did not feature in their 5-1 opening-day defeat against Manchester United (via Transfermarkt).

Despite the Whites not getting off to the start they would have wished for this season, these fans were clearly absolutely delighted for Phillips and his personal achievement.