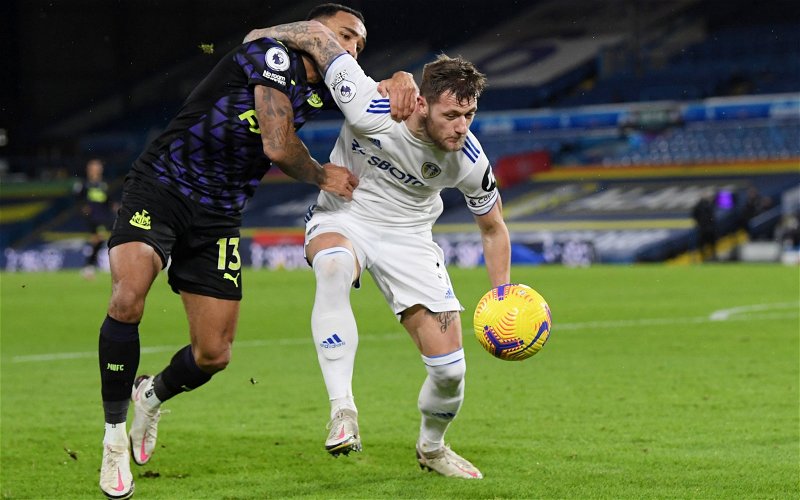 Leeds United fans on Twitter have been sharing their criticism for Whites defender Liam Cooper and his latest performance for the club during their Premier League match against Newcastle United.

Coming off the back of a disappointing 3-0 defeat against Liverpool at Elland Road last weekend, Marcelo Bielsa’s side travelled to St. James’ Park to take on Newcastle and try to secure their first win of the season.

During the game against the Tyneside club, Cooper’s performance, in particular, caught the attention of many Whites supporters, but for all the wrong reason, with many flocking to Twitter to share their thoughts and feelings.

So, what did these Leeds fans have to say about Cooper’s performance against Newcastle?

“Saint-maximin vs Cooper should be illegal”

“The defending is embarrassing. It has to improve. Cooper v Saint Maximim is laughable.”

“I know we’re low on CBs right now but Cooper is dreadful, would rather see Cresswell given a go. As a minimum he shouldn’t be left alone anywhere near Saint Maximim! Ayling and Dallas very poor too. Concerning #lufc“

“Liam Cooper is a liability #lufc“

“Cooper is the weakest link and causing massive uncertainty in the middle. #lufc“

Looking at this group of tweets from these Leeds fans, it’s clear to see that they were not happy with what they saw from Cooper during the game against Newcastle.

Looking ahead, these and many other Leeds fans will undoubtedly be hoping that the 30-year-old can improve his game or else he could find himself on the receiving end of even more criticism from the fans and possibly even out of the team moving forward.

Do you think Cooper is past his best?

However, with Cooper currently being the only centre-back available for Bielsa, it seems as though the Leeds fans will have to make do with him in the team for the time being and just hope he can improve.

In other news: ‘It was a non-story’ – Phil Hay reveals interesting Leeds transfer details