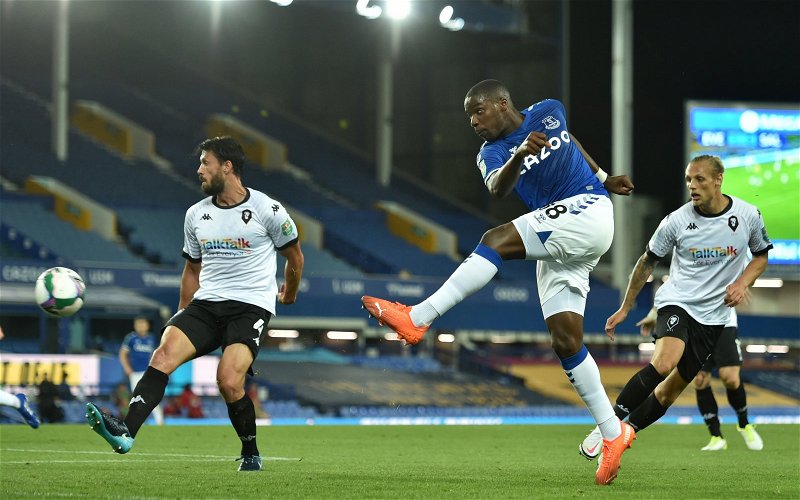 The Athletic’s Greg O’Keeffe has stated that Everton’s decision to loan out Niels Nkounkou ‘deserves some explaining’.

The Toffees have seen a number of new players – Asmir Begovic, Salomon Rondon, Andy Lonergan, Demarai Gray, and Andros Townsend – arrive at the club this summer, while only spending £1.7m in transfer fees.

For all this clever business, the decision to let Nkounkou leave for the season without signing a replacement option has been harshly criticised by O’Keeffe.

Discussing the topic on The All Together Now Everton Podcast, O’Keeffe outlined why he thinks it could be an issue, saying: “They’ve also made the decision to loan out Niels Nkounkou, which I think deserves some explaining, really.

“While I know he flattered to deceive after he broke into the team under Ancelotti and came through like a steam train, then dipped a little bit, had some difficult games, and you thought okay, maybe not quite there – he’s still a specialist left-back.

“Letting him go with no one behind him as well, begs the question again – you’re asking [Ben] Godfrey to fill a gap, or dare I even suggest it, Fabian Delph.”

The French left-back joined the Toffees in the summer of 2020 but has struggled to nail down a starting spot. Indeed, he made just six appearances last season and has only featured once in the current campaign – a Carabao Cup game at Huddersfield Town.

It’s clear that Everton did want to bring in a new man on transfer deadline day. Versatile Arsenal defender Ainsley Maitland-Niles was targeted, but the club ultimately could not get that deal across the line.

Lucas Digne will be the first-choice option for the season, but if he suffers a significant injury or loss of form, the club could well be embarrassed by their decision to let Nkounkou leave.

Everton fans will likely be praying Digne comes back from international duty fully fit and raring to go.