The Toffees are currently enjoying their start to life under Rafael Benitez having lost just once in the league thus far and are still unbeaten at home – a stark contrast to their home form under Carlo Ancelotti last season, especially in the second half of the campaign. 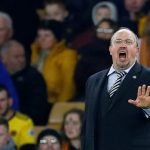 Dobbin, who has come through Everton’s academy system, was yet to even feature on the bench under Benitez, but was handed that luxury against Norwich City last weekend, and led to the youngster being handed his debut when he featured for the closing stages.

Prentice expressed his delight at seeing Dobbin make his debut at Goodison Park.

“I love to see stuff like that, and I love the explanation for it afterwards as well – it was because Lewis Dobbin had impressed in training sessions during the week.

“He’d [Benitez] seen this young lad giving absolutely everything and thought right, okay, a) you deserve a place on the bench, and then b) because you’ve worked so hard, okay, the game’s won, let’s give you a couple of minutes at the end, so just enjoy yourself.

“So yeah, it was good to see and it also sends out a little message then, doesn’t it, to other people in the squad, you know, so what you do on the training pitch is noticed and will be rewarded.”

TIF Thoughts on Dobbin and Everton under Benitez…

Dobbin’s best season in the youth ranks for Everton was in the 2019/20 campaign when he scored 11 times and also registered five assists in just 16 games for the under 18s and unfortunately, he damaged the popliteal artery in his knee and saw last season cut short.

During Benitez’s last stint as a manager in the Premier League, he handed a league debut to Sean Longstaff at Newcastle United and the midfielder has since remained in the first team every season, so the Spaniard is willing to give players minutes in the first team if they prove and deserve it. This was what earned Dobbin his first appearance in the Premier League as Benitez claimed he is ‘really pleased‘ with Dobbin training.