The Athletic reported that Palace were ready to pay £10m to bring the striker into the club amid an aggressive summer of recruitment.

Patrick Vieira’s side looked to restructure their squad and signed Marc Guehi from Chelsea, Joachim Andersen from Lyon, Odsonne Edouard from Celtic, Michael Olise from Reading and Will Hughes from Watford.

Does Nketiah have a future at Arsenal? 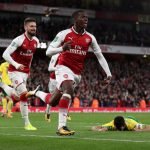 However, they were unable to strike a deal for Nketiah, with Arsenal wanting closer to £20m for the forward.

Bent believes that Palace were right to value the Gunners forward as they did after such an inconsistent spell at the club.

Nketiah has made a total of 65 appearances at Arsenal and has scored 13 goals in total, while also providing one assist.

Speaking exclusively to The Transfer Tavern, he said: “I think 10 million is a good price. 10 million for Palace is good.”