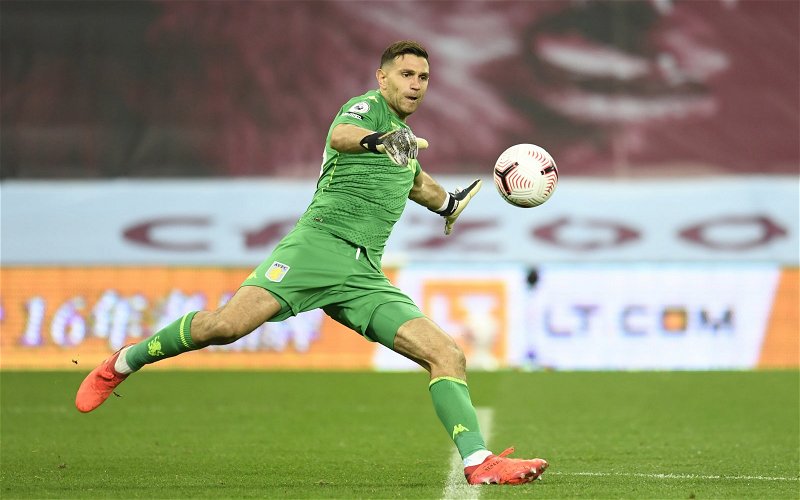 Aston Villa presenter Dan Rolinson has been sharing his thoughts on Villa goalkeeper Emi Martinez and his time at the Midlands club so far.

This comes after Rolinson hosted a recent episode of the Birmingham Mail’s Claret & Blue Podcast, where he spoke about a range of topics concerning the Villans.

On the subject of Martinez, who managed to keep a clean sheet during Villa’s previous Premier League fixture in their 1-0 victory over Manchester United at Old Trafford – and also celebrated Bruno Fernandes’ late penalty miss with a dance in front of the home fans, Rolinson had this to say about the shot-stopper.

He said: “Another one that sets the tone for the recruitment: good personality, clearly a winner, wants to win, mind games expert, just unreal.

“Against Man United, I know they had loads of shots in that game, but nothing really that’s troubled him, but when he is called upon, he’s there to race out and blast away a potential chance.

“You want your footballers to be good at football first and foremost, but the little things that make them have a good personality and will wind up the opposition, we’ve missed that for a few years, and I like having that in the squad and he is good at football as well.”

Villa signed Martinez in the 2020 summer transfer window from fellow Premier League club Arsenal for a fee of £15.66 million.

Since then, the Argentine has firmly placed himself as Villa’s first-choice goalkeeper having made 43 appearances across all competitions, in which he has managed to keep 18 clean sheets along the way.

Also, given how the 29-year-old, who is currently valued at £31.5 million, was voted as Villa’s 2020/21 Supporters’ Player of the Season, this shows just how highly regarded he is at the club and why Rolinson was so full of praise for him, and why we feel he has been a fantastic signing from the club.

Is Martinez the best goalkeeper Villa have ever had in the Premier League?

Moving forward, with Martinez having managed to keep three clean sheets in the five Premier League games he’s played in so far this season, if he can continue helping the team keep clean sheets throughout the remainder of the campaign, he could well be in the race to win the Golden Glove by the end of it.

In other news: ‘Smith’s improved him tenfold’ – Preece tips ‘incredible’ Villa ace to start against MUFC