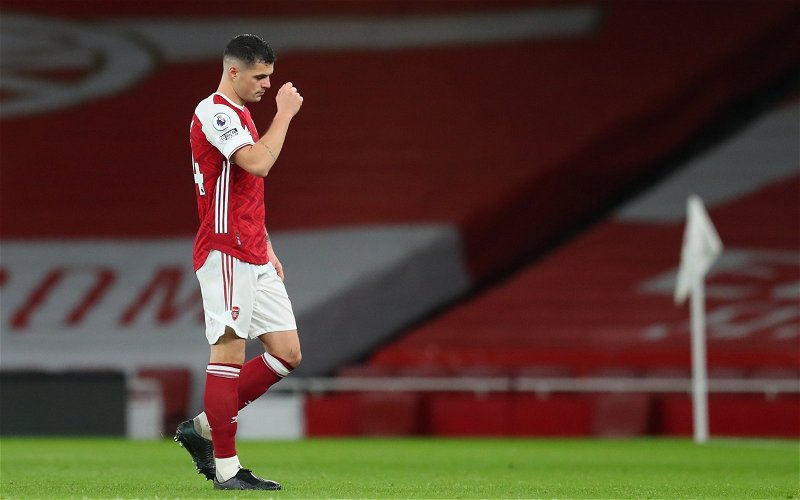 Arsenal writer Charles Watts has claimed that Albert Sambi Lokonga could be set to benefit from the recent injury to Granit Xhaka.

One unfortunate outcome from an otherwise brilliant north London derby win for Arsenal over the past weekend was the injury sustained by the club’s Swiss midfielder.

After colliding with Tottenham Hotspur man Lucas Moura, Xhaka had to leave the pitch. The club’s official website have now provided an update on the 29-year-old, who looks set to miss three months of football due to significant damage to his medial knee ligament.

Against Spurs, Lokonga was the man brought on to replace Xhaka – now, Watts believes he could be set for a key role in the team.

While speaking on his YouTube channel, Watts said: “For Sambi, you think it’s a big, big opportunity for him. He’s come in, he’s looked impressive since he arrived in the summer from Belgium.

“But he was always kind of coming in to learn his trade a little bit and be used in-and-out, sparingly, this season.

“You know Xhaka and Partey was very much Arteta’s key partnership in central midfield. So now it’ll be interesting to see if Sambi gets a prolonged spell next to Partey, in that sort of double pivot role that him and Xhaka usually operate in.”

Lokonga was thrust into the first team early on in his Arsenal career, starting in the defeats to Brentford and Chelsea.

The young Belgian dropped to the bench for the following game against Manchester City, though he did return to the starting lineup against Norwich City, but has since failed to start in either of the side’s last two league matches.

It now looks, however, as if Lokonga could return to the side on a more consistent basis.

The injury to Xhaka will come as a big blow for Mikel Arteta, who must have felt he’d found a pretty good formula with his double-pivot, which was used to completely overwhelm Spurs in their last league match.

Will Emile Smith Rowe help Arsenal back into Europe this season?

Still, Lokonga has drawn praise already in an Arsenal shirt and should have ample opportunity to continue impressing in the coming weeks and months.