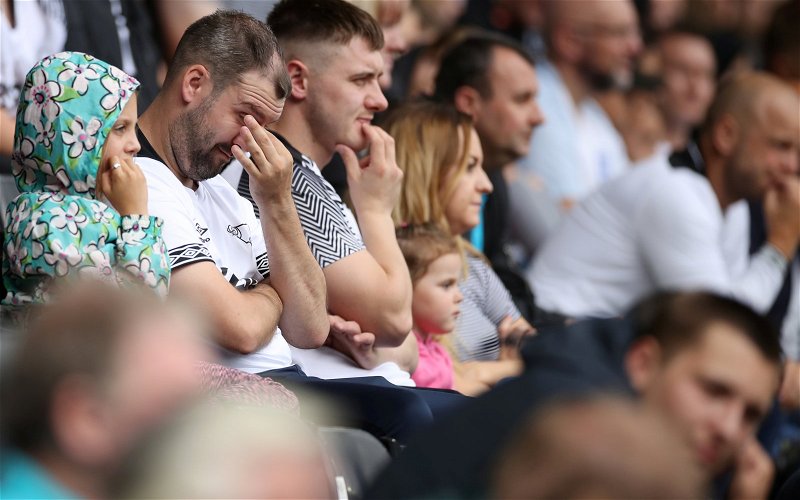 Lots of Derby County fans have voiced their thoughts at the latest news to emerge from the club’s Twitter account regarding their financial issues.

On Wednesday afternoon, the Rams confirmed Andrew Hosking, Carl Jackson and Andrew Andronikou of Quantuma had been appointed as the club’s administrators.

The club has gone into administration with its owner, Mel Morris, reporting the Championship club to be losing between £1.3m-£1.5m per month.

Derby were also hit with a 12-point deduction on Wednesday, which has the Rams planted to the bottom of the Championship table on -2 points.

What exactly did these Derby fans have to say?

@MDrabble
“We knew it was coming but to see it confirmed is absolutely heartbreaking! Please someone save our beloved Rams”
@Paulderby501
“Gutted man”
@Nick_Davisonnn
“This is horrible man”
@SeanHagues
“Horrendous”
@paulasaffs
“A sad day. We’ll come back from this tho”
@SimplyDanW

Wayne Rooney’s men picked up three points on the weekend despite the news surrounding the club as they beat Stoke City in a 2-1 home victory at Pride Park, but now face an uphill task following the points deduction.

The news may not come as a surprise to Derby fans, however, it has clearly brought a lot of emotion up from these fans as their club endures a period of uncertainty about their future.

In other news: ‘The only thing they can do’ – Finance expert discusses transfer ‘double-edged sword’ at Derby