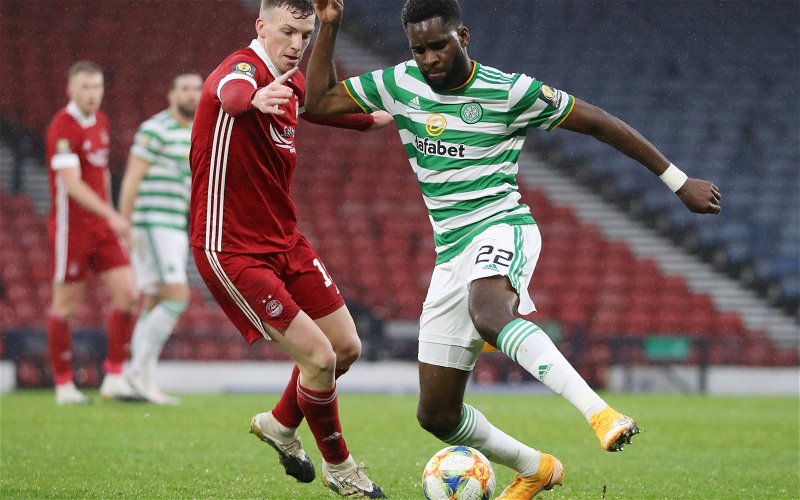 Football journalist Duncan Castles has been sharing some insight regarding Celtic striker Odsonne Edouard and his current situation at the Parkhead club.

This comes after Castles co-hosted a recent episode of The Transfer Window Podcast where he discussed a number of transfer-related news topics concerning a range of clubs across Europe.

On the subject of Edouard, who has been linked with a move away from Celtic this summer, Castles had this to say on the situation.

He said: “Celtic have been trying to sell Edouard for some time now.

“They have struggled for a couple of reasons. One, they want an extremely high transfer fee for a player who’s got one year left of contract and a player who is threatening now to stay an extra year at the club and leave as a free agent in a year’s time; they want over £20 million for him.

“Secondly, Edouard is being very fussy about his destination.

“He’s had approaches from Leicester City and Arsenal heading into this window. He feels he deserves to be at a top-end club if he moves to England.

“At present, the three clubs that have been pushing hardest to get him in the Premier League are Brighton, Crystal Palace and West Ham United, which is not the status he was looking for.

“He’s also asking for a salary of £85,000 per week, which would be achievable at some of those clubs.”

Since joining the Bhoys, originally on a loan deal from French club Paris Saint-Germain in the 2017 summer transfer window, before signing him on a permanent deal a year later, the 23-year-old, who is currently valued at £15.3 million according to Transfermarkt, has scored 86 goals in 178 appearances for Celtic, following his substitute appearance in their Europa League clash against AZ Alkmaar.

Do you think Edouard will leave this summer?

In our view, it would be in Celtic’s best interests, in a financial sense, if they were able to sell Edouard this summer and get a suitable fee for him rather than letting him go as a free agent next summer when his contract expires.

However, with the striker apparently being fussy about what team he joins, as Castles spoke mentioned, it seems that the club could well be stuck with him for the season.

On the other hand, if the Frenchman were to leave this summer, the fact that Kyogo Furuhashi has managed to score six goals in seven appearances for the club so far this season could soften the potential blow of losing Edouard for nothing.

In other news: ‘Yasss’, ‘I hope this is true’ – Many Celtic fans buzz as ‘positive’ Ange quote emerges