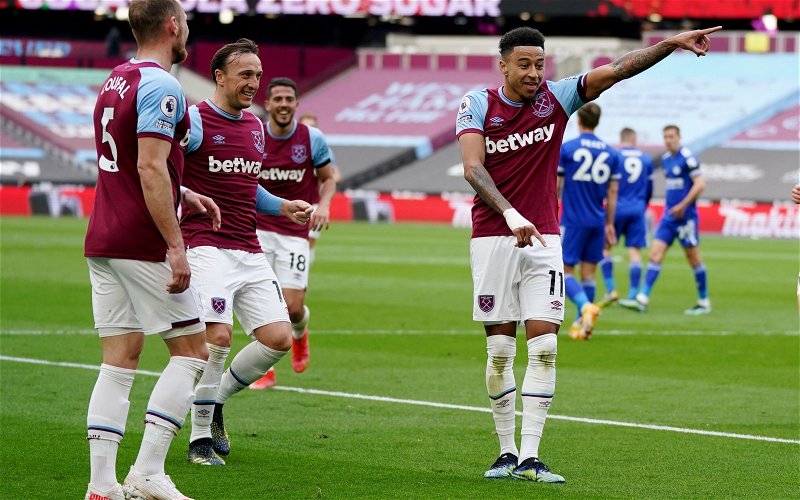 Football journalist Dean Jones has been sharing some insight regarding the possibility of West Ham United making a transfer move to sign Manchester United midfielder Jesse Lingard this summer.

This comes after Jones made an appearance on a recent edition of The Done Deal Show from The Football Terrace YouTube channel where he spoke about a range of transfer-related topics.

On the subject of a potential move for Lingard this summer from West Ham, which has been rumoured throughout the summer, Jones had this to say.

He said: “The reason they haven’t made a bid for Lingard is because they’re waiting to see if he’s actually in the team at Man United by the end of the month.

“If Lingard isn’t playing for Man United, isn’t getting a kick, then I think there’s a chance West Ham do have another go at getting Lingard.

“But as it stands right now, there’s just no point, because Lingard wants to prove himself at Man United and have a go at it, and West Ham aren’t doing any business to convince him that he’d be better off jumping over to them.”

As a product of Manchester United’s youth system, Lingard made his senior debut for the club back in August 2014 in a 2-1 defeat against Swansea City.

Since then, the 28-year-old, who is currently valued at £19.8 million, has made 210 appearances for the club across all competitions in which he has managed to score 33 goals and provide 20 assists along the way (per Transfermarkt).

Considering how Lingard managed to score nine goals and provide five assists in 16 appearances for David Moyes’ side during his loan spell at the east London club last season, it’s understandable, in our view, that the club would want to sign him again this summer.

Do you think West Ham should keep trying to sign Lingard this summer?

However, with Ole Gunnar Solskjaer previously claiming that Lingard is in his plans at Old Trafford moving forward, it could prove to be quite difficult for West Ham to take him away from the club on a permanent basis this summer, especially if Lingard would prefer to stay in Manchester, as Jones mentioned.

But, with the midfielder having tested positive recently, it will be interesting to see if this could have any impact on his playing time with the Red Devils in the coming weeks and if that could then push West Ham into making a move for him.

In other news: ‘The only issue’ – Journalist drops West Ham transfer update