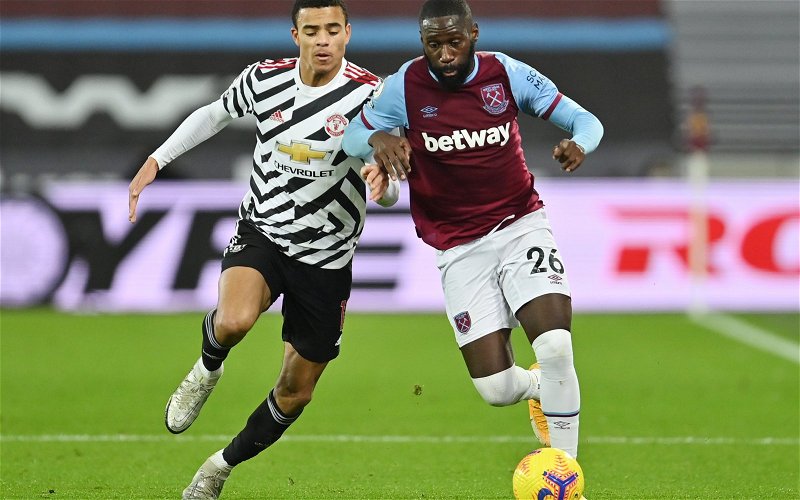 West Ham United insider @ExWHUemployee has been sharing some details on the recovery of Hammers defender Arthur Masuaku from a knee injury.

This comes after Ex co-hosted a recent episode of The West Ham Way Podcast, where he spoke about a range of topics concerning the east London club.

On the subject of Masuaku, who has not featured for the club since December having undergone knee surgery, Ex had this to say about the player and a potential return to action.

He said: “Masuaku is pushing to be available for Leicester. However, there is some concern still over his knee.

“I think he should be okay, but this knee problem has been going on for a long time now, where he’s had operations and then the operation hasn’t been that successful, and so there are fears a bit over his knee.

“He might take a while before he can really start to play significant minutes, they’re going to build him up and just keep monitoring that knee, but I think they’re going to have to sort of monitor his training a little bit.

“Hopefully, it’s nothing, but he’s had quite a few problems with the same knee for a while now.”

West Ham signed Masuaku back in the 2016 summer transfer window from Greek side Olympiacos for a fee of £6.39 million.

Since then, the 27-year-old, who is currently valued at £6.3 million, has made 107 appearances for the Hammers across all competitions in which he has managed to score one goal and provide nine assists along the way (per Transfermarkt).

Given how long the left-back has been out of action for, it’s understandable why the club are being cautious about when he will be able to get back on the pitch again.

Are you excited to see Masuaku back on the pitch?

However, considering how impressive he was in the Premier League last season before picking up his injury, where he provided two assists and earned himself an overall performance rating of 6.89/10 – making him West Ham’s sixth-highest rated player according to WhoScored – it’s easy to imagine that the club would want the defender back playing as soon as he can, so he can try to regain the form he was showing before his injury.

In our view, while Masuaku would presumably be very keen to get back on the pitch with the rest of his West Ham teammates, we feel that they will have to be careful with him and the minutes he plays so they can ease him back into action after being on the sidelines for so long.