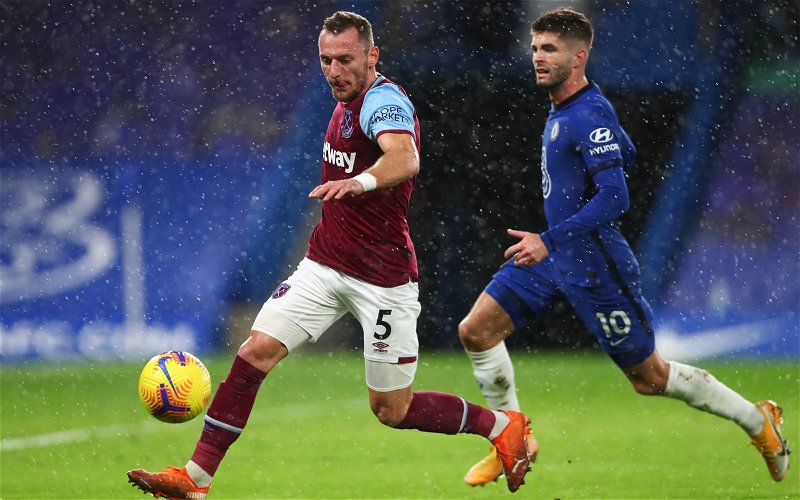 West Ham United insider @ExWHUemployee has been sharing some insight regarding the current situation surrounding Hammers defender Vladimir Coufal and a potential new contract for him at the east London club.

This comes after Ex co-hosted a recent edition of The West Ham Way Podcast where he spoke about a variety of topics concerning David Moyes’ side.

After it was previously reported that the defender was apparently let down by the initial offer from the east London club for a new contract, Ex had this to say on the situation.

“It is more money than he is on now, not a huge amount more, because his pay increase from when he left Slavia Prague to join West Ham was a significant increase.

“He’s got four years left on his contract, so really, West Ham don’t have to offer him a new contract as such, but they want to show their gratitude for his performances and show that they see him as a big part of the long-term plans that they have actually offered him a new deal, but’s been going in the papers and everything about how Coufal’s rejected it and he was offered the same money as he was on before.

“That’s not true; he has been offered more money.

“There’s no rush to get it done because obviously he’s got four years left, but I don’t think there are any concerns about the fact that he hasn’t signed it yet.”

As Ex mentioned, West Ham signed Coufal back in October last year from Slavia Prague for a fee of £5.4 million.

Since then, the 28-year-old, who is currently valued at £10.8 million according to Transfermarkt, has made 37 appearances for the Hammers across all competitions in which he has managed to provide seven assists along the way.

Taking into account how only Michail Antonio, Declan Rice, Jesse Lingard and Tomas Soucek earned higher overall season ratings than Coufal in the Premier League last season according to WhoScored, it’s easy to see why the club would offer the defender a new and improved deal despite him yet having reached a full year into his current contract.

But perhaps after reaching the Europa League group stages, the club feel it would only be right to reward the defender for his efforts over the past year.

In our view, if West Ham are certain about offering the full-back a new deal, then they will have to make sure it suits Coufal.

However, we feel that while it does seem like a nice gesture from the club to offer him a new deal to show how impressed they have been with him since his arrival, it perhaps may not be the most necessary move from the club at this moment in time, given the time left on his current deal, as Ex alludes to.