A lot of Tottenham Hotspur fans have taken to Twitter to voice their thoughts on the latest to emerge in their transfer saga with Cristian Romero.

The Argentine centre-back is expected to be announced as a Tottenham player shortly with a deal reportedly agreed between Atalanta and the north London side.

Will Romero transform the Spurs defence? 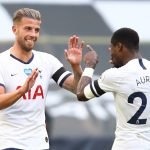 It is believed the 23-year-old flew out to London on Thursday to complete the second part of his Spurs medical and he spoke of his excitement to join the club at an Italian airport (via Sky Italia).

He said: “From day one they were strongly interested, I liked the project they have for me and that’s why I chose Tottenham.”

Spurs fans flocked to a tweet from The Spurs Web, which cited TuttoMercatoWeb’s take on the quotes, to share their thoughts on the comments to emerge from their expected new signing, with many feeling that supposedly being persuaded by Daniel Levy to join the club is not the best of signs.

“Not sure I like this guy anymore. He likes Levy’s project”

@oliver_grant24
“Another man fooled by levy’s “project””
@THFCSean_
“I’m scared to even ask how Levy convinced him but SIUUUUUUU!”
@AstroLaRoche
“Clearly lacks ambition”
@MCWWIII
“Oh dear is anyone gonna tell him”
@Jon1Labi
“Reading “Levy’s project” kinda made me throw up a bit ngl”
@OpinionsHotspur

The Argentine is expected to sign the dotted line on a deal believed to be worth in the region of €50m (£42.7m) plus add ons rising to €55m (£47m) as Spurs look set to sign their potential Toby Alderweireld replacement.

It seems the comments to emerge from the Argentine has these Spurs fans cautious as they question what Daniel Levy’s ‘project’ actually is for the upcoming season following their underwhelming 2020/21 season.