A lot of Tottenham Hotspur fans have flocked to a tweet from Fabrizio Romano to share their delight at the latest transfer claim regarding the north London club.

The transfer insider shared an update from journalist Gabriel Sans that claims Spurs are close to agreeing on a deal with Barcelona for right-back Emerson Royal, with the fee expected to be in the region of €30m (£25.7m).

Would Emerson Royal start over Tanganga at Spurs? 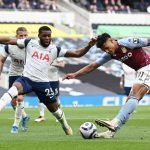 It is thought that negotiations are yet to be finalised, however, a deal for the 22-year-old will not include the current Spurs right-back Serge Aurier.

Spurs fans flocked to the tweet from the insider to share their excitement about being linked to a new right-back given the speculation surrounding Aurier’s future with the club.

The north London club have been heavily linked with Bologna right-back Takehiro Tomiyasu all summer, but it appears a potential deal for him may now be on the back-burners, with the Brazilian now close to a move.

Despite Nuno Espirito Santo’s side sitting top of the league without conceding a goal in the Premier League, it seems these Spurs fans would be delighted at seeing the right-back added to their squad.