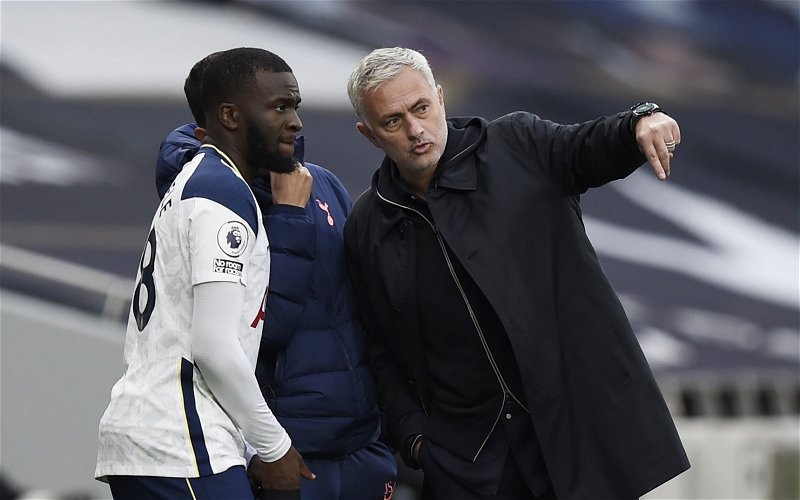 Tottenham Hotspur correspondent Alasdair Gold has been speaking about the future of Tanguy Ndombele with the north London side in his latest Facebook Live video.

The Spurs journalist has revealed the 24-year-old Frenchman is considering his future with the club amid reports two of his ‘friends’ are currently up for sale this summer.

Does Ndombele have a poor attitude?

It has been reported Serge Aurier and Moussa Sissoko are both on Tottenham’s transfer list this summer as Fabio Paratici leads the expected rebuild.

The Frenchman has returned to Tottenham’s pre-season training, however, questions have begun to arise with the midfielder having not featured in any of the pre-season games.

Having only joined the club two years ago for a club-record transfer fee, Gold discussed where the Frenchman’s head is currently at in regards to his future.

“Tanguy Ndombele, who obviously we still haven’t seen play a game in pre-season. He was at the open training session the other day but he’s still trying to get his fitness back. He had that time where he’d just become a new dad and he was in and out of training as well because of that.

“So now they’re trying to get his fitness levels up. I’m also told that he’s not best pleased obviously that Serge Aurier and Moussa Sissoko are likely to move on. They’re his two closest friends at Spurs. They’ve helped him adapt and live in the UK essentially since he came two years ago.

“But just with him, he’s just at this stage where he’s considering his options and what’s going to happen this summer, which he seems to do quite a lot.”

The Frenchman has had a really difficult time at Spurs since arriving in 2019 having struggled under Jose Mourinho for large parts of his tenure.

Ndombele has shown moments of brilliance including the stunning goal against Sheffield United last season, however, we question his attitude when it comes to the claims being made here.

We feel this situation needs to be resolved quickly from a Spurs point of view. The 24-year-old needs to decide if he really wants to be at Spurs and if he is going to give it all he has in the upcoming season.

If not, then Spurs could look to offload him for a hefty price tag with four years remaining on his current deal.