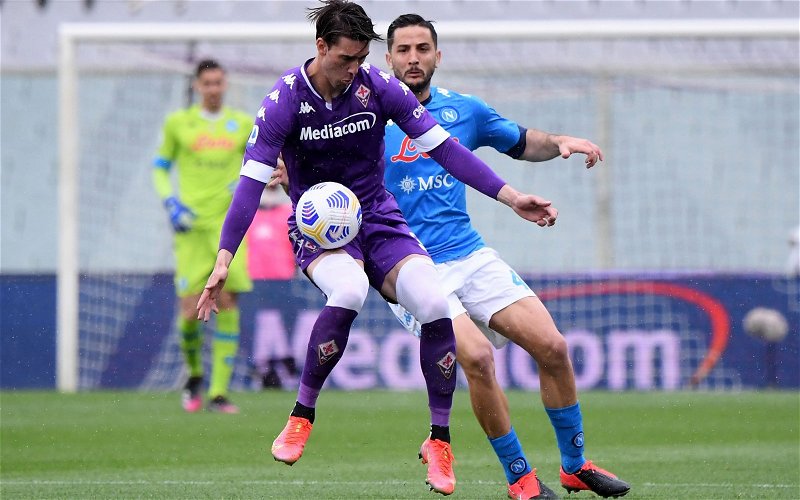 Tottenham Hotspur journalist Alasdair Gold has been speaking on the Gold & Guest Talk Tottenham podcast to discuss all things related to the north London club.

One player in which the journalist spoke about was the Fiorentina striker Dusan Vlahovic who has been linked with a potential summer switch to the Lilywhites.

Would Vlahovic be a good Kane replacement?

This news comes following Harry Kane’s decision to not show up for training on Monday and Tuesday, which were expected to be his first days back at Hotspur Way following his summer break.

According to a report from The Telegraph, a potential deal for the Serbian striker could cost Spurs in excess of £40m this summer with two years remaining on his current deal.

Discussing Tottenham’s reported interest in the 21-year-old striker, Gold had the following to say.

“I think Vlahovic is certainly a player [Fabio] Paratici really likes and I think if Tottenham get the money in, I think that’s one that could happen.”

We think Harry Kane’s current situation at Spurs could play a major role in the club’s transfer activity this summer.

Having already sealed the arrivals of Bryan Gil and goalkeeper Pierluigi Gollini, as well as reportedly nearing a deal for Cristian Romero, Kane’s recent decision to not turn up to Hotspur Way for training could intensify this transfer saga and potentially put Spurs in need of upping their pursuit of a new striker ahead of the Premier League campaign.

With this in mind, we think Vlahovic could make a good option for Spurs if they are to lose Kane this summer.

The 21-year-old had a fantastic 2020/21 Serie A campaign having scored 21 goals and standing at 6ft 2in (1.9m), we think he could handle the physicality of the Premier League.