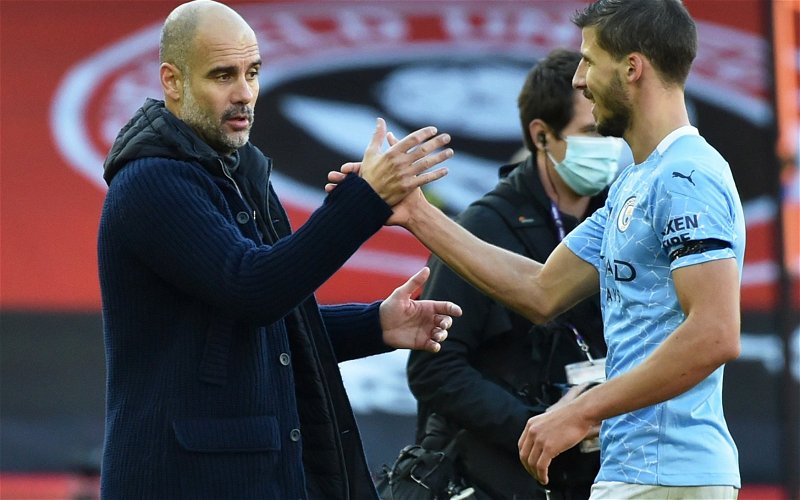 Former professional footballer Carlton Palmer believes the signing of Ruben Dias by Manchester City gave the club that solid foundation they were looking for and also helped bring John Stones back to form.

Dias joined Manchester City from Benfica, signing a six-year deal at the Etihad Stadium, with the transfer fee thought to be in the region of £65m [BBC Sport].

The Portuguese centre-back was an important part of Pep Guardiola’s team last season, featuring in 53 matches in all competitions and helping the Cityzens to win the Premier League and the Carabao Cup.

Dias formed a formidable partnership with England defender John Stones, with the pair alongside City’s other defenders helping the club concede the fewest goals (32) than any other team in the Premier League.

Dias was seen as the replacement to Vincent Kompany, with Palmer full of praise for the centre-back, telling This is Futbol: “You look when they went onto win the league title, they had to go and buy Dias who came in there who gave them that solid foundation and once that solid foundation came.

“All of a sudden John Stones came back into the game because the pressure wasn’t on him, which it became on him when Kompany went, and he needed somebody of stature who could give them that solid foundation and that’s what you’re looking for.”

The pair were immense last season and helped City to be successful winning a double and Dias picked up an individual accolade also, as he was named Premier League Player of the Season.

John Stones has also been rewarded for his fine form last season, as he has signed a contract extension with City until 2026. On his new contract and return to form, Stones told the Guardian: “It was just doing more training, more gym, finding little details with food or recovery, anything I could find to improve I tried to improve on. I have set the bar now for myself and I still feel that there is room to improve on the non-football aspect off the pitch and definitely on the pitch as well.”